In what is perhaps an unintended complement to a new anti-Critz paid for by the NRCC, GOP PA-12 candidate Keith Rothfus has released his second campaign ad today highlighting, again, his credentials as a “regular guy” who just happens to be running for Congress.

Much like his first ad, this video – called “Golf” – shows the candidate in his role as a father. Last time he was dropping the kids off at school and fixing one of his daughter’s bikes, and this time he’s playing miniature golf with them.

The ad isn’t all positive, though. The announcer takes the opportunity to take a swing at Obama first, then Rothfus’ challenger Rep. Mark Critz (D-Cambria). 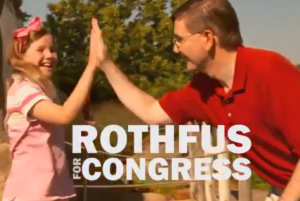 The narrator, in a loud and booming voice says, “As President, Barack Obama has played over 100 rounds of golf. Keith Rothfus has played one round – of miniature golf.”

Video shows Rothfus getting a hole-in-one and celebrating with high fives from two of his children.

“Keith’s a concerned dad, a regular guy, and he’s running for Congress.”

Then the ad then turns to both the President and Critz, saying the pair are out of touch with the middle class and have allowed out-of-control debt, spending and unemployment.

Critz campaign spokesperson Mike Mikus said no matter how the GOP candidate tries to portray himself, people should know that he’s not an Average Joe.

“Millionaire Keith Rothfus supports unfair trade deals that ship Pennsylvania jobs to countries like China and India and that shows that he is anything but a regular guy,” Mikus said. “No matter how many lawns he may mow or how many rounds of miniature golf he plays, nothing will change the fact that Keith Rothfus supports policies that kill western Pennsylvania jobs.”

Mikus said Critz has worked to reduce the deficit and national debt while opposing the outsourcing of jobs.

While the spot is a slight shift from the all-positive first ad with Rothfus grilling in his backyard, even the negative features of the ad are coupled with shots of the candidate spending time with his family on a nice, sunny day and lacks the typical ominous music and grainy black-and-white footage to accompany any of its negative assertions about Obama and Critz.