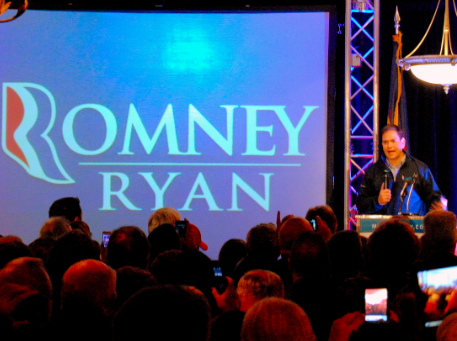 The crowd, filling two rooms, was exuberant, and the music lively.  Delaware County Republicans packed the room at Heritage Ballrooms eager to hear from one of the Republican Party’s most vibrant members.

A thrill for Delaware County to host this event at such a crucial time, Rep. Pat Meehan (R-Delaware) cried “Pennsylvania is in play!” as he introduced Rubio.

Rubio was emphatic that for Republican voters this election will mean the difference between two very different futures.  One future will be overwrought with government regulations and for the United States will “lose a lot of the things that make us exceptional.”  Rubio waxed poetic as he painted a picture of the future should Romney win the presidency, referencing the Founders’ America and the vision of the American Dream.

Thought the comparison he drew was striking, one must take into account the actual powers of the executive and whether or not such change, in either direction, is realistic within the next four years.

The enthusiasm was contagious among the crowd, and after a few rousing shouts from the audience, Rubio refocused his speech laughing and saying, “I love supportive hecklers.”

Rubio’s speech didn’t lack pragmatism though.  He warned that if the members of both parties don’t reach across the aisle and work with people not only of other parties but also “of other principles” that progress cannot occur.

In closing, Rubio impressed upon the attendees how important their role is in a swing state.  Already claiming an increase of 17 percent in absentee ballots over last election, Rubio said
“It is very significant; it Mitt Romney wins Pennsylvania, he will be the next President of the United States.”

Such assumptions should be taken with a grain of salt however; Democrats have keenly been pointing out that Republicans have a history of exaggerating their chances here.

In 2008, Romney called Pennsylvania for McCain. The state went blue by 11 points.