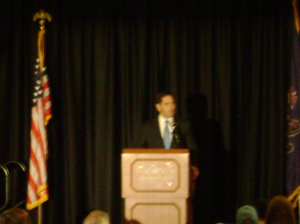 Four months ago, I witnessed Scott Walker speak to the NRLC in Philadelphia. Last night, I saw Marco Rubio address the Chester County GOP Fall Reception. The latter man gave a much better performance. Although given that the former isn’t even a presidential candidate anymore, that shouldn’t be surprising.

Many of Southeastern Pennsylvania’s top Republicans ventured to King of Prussia and the Crowne Plaza ballroom to hear a man some major prognosticators believe is best positioned to win the GOP nomination.

Congressman Ryan Costello and Pat Meehan were there as well as a slew of local state officials. Among them were State Sen. John Rafferty and State Rep. Todd Stephens, who are each seeking the Republican nomination for Attorney General in 2016. PA-8 hopeful and State Rep. Scott Petri was also in attendance.

Back in the east, Rubio delivered his stump speech to about 700 to 800 attendees, according to County Party Chair Val DiGiorgio.

His theme was making the 21st century “the New American Century”, a clever way of capitalizing on the fact that his main competition (and former political mentor) Jeb Bush, has a close connection to the politics of the past.

The candidate also touched on his own humble roots.

“I know what it’s like to graduate from college with over $100,000 in student loans,” Rubio stated before transitioning to a joke. “If my wife had known that, she might have answered differently when I asked her to marry me. She wanted to know who Sallie Mae was and why I kept paying her.”

The Florida Senator touched on plenty of other issues important to Republicans including repealing Obamacare, reforming Social Security and Medicare as well as the education system. At different points, he called for a “manufacturing renaissance” and an “economic renaissance”.

Rubio went on to accuse the educators and schools of steering kids away from jobs involving physical labor.

“A welder makes a lot more than a philosopher,” he stated. “The market for philosophers has tightened over the last two thousand years.”

The presidential hopeful then shifted to a discourse on the country’s history and its revolutions, wars and depressions. It was nearly Kennedy-esque in its style.

“Now it’s our turn. Now the time has come for this generation, for you and I and those alive in this time and place, to do our part. To write our chapter in the amazing story of America,” Rubio said. “While America owes me absolutely nothing, I have a debt to America.”

As any good politician should, his finished with his strongest material. He noted that his father worked in hotel bars in rooms like the one he was speaking in. Rubio asserted that the journey from his father’s bar in the back of the room to his place behind the podium at the front was “the essence of the American dream.”

At this moment, he has started to emerge from the back of the pack in the Republican presidential field, but he’s not at the podium yet.