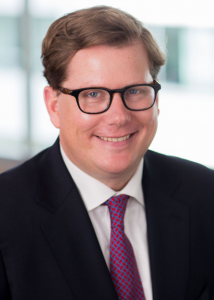 The former Chief of Staff to Kathleen Kane resigned in May of 2015 after just a few months on the job.

Now, the new Attorney General Bruce Beemer is bringing Rutherford back as a Special Advisor. Beemer indicated that this will be an unpaid, volunteer position.

“Blake has extensive experience in government and a familiarity with our office, which makes him well suited to help us in the coming months,” Attorney General Beemer said.

The AG’s office provided the following biographical information on Rutherford:

Rutherford has extensive professional experience in law, politics and communications. He is currently a member of Cozen O’Connor, PC and Cozen O’Connor Public Strategies, LLC in Philadelphia and Washington, D.C. Cozen O’Connor is a full-service law firm with more than 600 attorneys practicing across the country.

In his current role, Rutherford advises and advocates for clients across a host of regulatory and policy issues at the state and federal levels.

Prior to his earlier service with the Pennsylvania Office of Attorney General, Rutherford served as Chief of Staff for the Arkansas Attorney General’s office. He also was the Vice President of McLarty Companies, a fourth-generation family office led by former Clinton White House Chief of Staff Thomas F. “Mack” McLarty. He focused on transportation, nonprofit, commercial real estate and financial services issues while also providing executive management, business and communications strategy.

In addition to his work for Cozen O’Connor, Rutherford has served as an adjunct professor in the Graduate School of Media and Communications at Temple University. Rutherford studied political science at Middlebury College, where he earned a bachelor’s degree. He earned his law degree from the University of Arkansas School of Law.