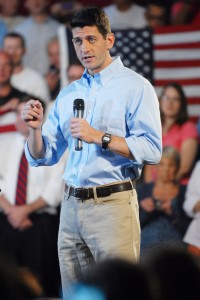 Ryan’s first Pennsylvania campaign tour ends this afternoon with a stop in West Chester – an area more in tune with Romney and Ryan’s economic philosophy.

But in southwestern Pennsylvania, an area heavily-populated with Medicare recipients, Obamacare was the theme of the day.

Ryan said 38 percent of seniors in Pennsylvania use the Medicare Advantage program, a premium service available under the current Medicare format. But under the Affordable Healthcare Act, Ryan said half of those seniors would lose their coverage.

Democrats have accused Ryan and Romney of hypocrisy in their criticisms of the act’s removal of Medicare funding, saying that Ryan’s proposed House budget removes over $700 billion from the popular program and transforms it into a voucher system.

Before the rally, Allegheny County Executive Rich Fitzgerald and other local Democratic and labor officials held a press conference nearby attacking Romney and Ryan for attempting to reduce the quality of life for the county’s seniors.

“The fact that Mr. Romney and Mr. Ryan would put [seniors’ quality of life] at risk by putting a voucher system in on Medicare and take Medicare away from our seniors and privatizing Social Security-we know what happened on Wall Street when all of them were in charge,” Fitzgerald said.

As he stood in front of a sign reading “We did build it!” – a reference to a speech made by Obama earlier this summer in Virginia, where he spoke on the role of infrastructure in the economy – Ryan criticized the President for the national unemployment percentage remaining above 8 percent for 42 months.

He added that under a Romney presidency, the government wouldn’t “pick winners and losers.”

“Here is the commitment that Mitt Romney and I are making, together: we will not jumble tough issues, we won’t kick the can down the road-we will lead,” Ryan said.

After a steady stream of “U.S.A, U.S.A!” chants from the raucous crowd, Ryan concluded his speech by explaining the magnitude of the November presidential vision, saying “it’s not too late” to turn around the country.

“This is our moment. This is our generation’s defining moment,” Ryan said. “For every generation you come from, it’s the most important election in your life because this is the time to show you’re Americans. And I’m here to tell you it’s not too late to get this right.”