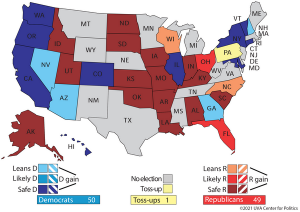 Larry Sabato’s Crystal Ball’s initial 2022 Senate ratings only lists one race as a Toss-up. That Senate race is in Pennsylvania.

“Democrats’ clearest path to gaining seats runs primarily through the Rust Belt, as Pennsylvania and Wisconsin seem to be their top offensive races, though they may finally get lucky in North Carolina,” writes J. Miles Coleman.

Sen. Pat Toomey, who Coleman describes as a “reformist conservative with an interest in fiscal issues,” who has advocated for term limits, announced in October 2020 that he would not seek a third term.

The article continues to detail the Democratic race that immediately began after Toomey’s retirement announcement and cites Lt. Gov. John Fetterman and Rep. Chrissy Houlahan (D-Chester) as possible candidates considering a Senate run and broke down the regional battle that would ensue if they were the lone candidates in the primary. Coleman also added that Reps. Matt Cartwright (D-Lackawanna) and Conor Lamb (D-Allegheny) “could get tougher districts for 2022 — something that could push them to run statewide.”

On the GOP side, Coleman writes that “any number” of Republicans could run, but only specifically mentioned former Congressman Ryan Costello (R-Chester) by name as a possible candidate, although added that his “biggest obstacle” would be the declining numbers of registered Republicans in the Philadelphia suburbs.