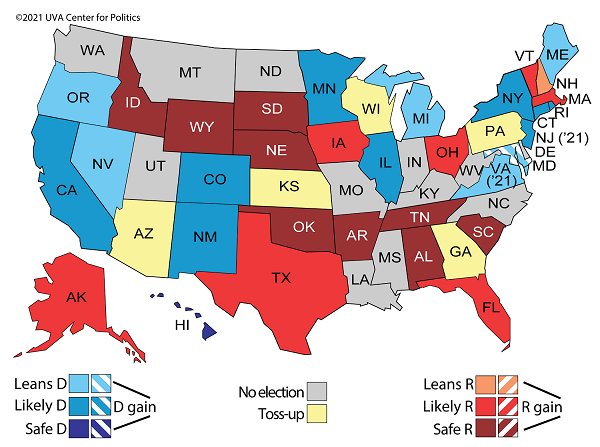 The Senate race isn’t the only Toss-Up in the Keystone State in 2022, according to this national ratings outlet.

Larry Sabato’s Crystal Ball rates Pennsylvania’s Governor’s race in 2022 as a Toss-Up in their initial ratings for the cycle.

Only one 2022 hopeful is mentioned in the rating – Attorney General Josh Shapiro.

Coleman writes that Shapiro’s interest in the governorship has been a “poorly kept secret” in Pennsylvania politics.

“The Republican side is more open,” Coleman adds.

The analysis ends with noting some more history for Pennsylvania statewide races.

“Pennsylvania is unique this year in that it has open contests for both Senate and governor, so candidates may take some time to settle on which campaign seems more promising,” Coleman writes. “Until Wolf’s 2014 victory, one rhythm was constant in state politics: beginning in 1954, Pennsylvania voters would put one party in control of the statehouse for two terms, then choose the other party for two terms. Could 2022 mark a return to form?”

Sabato’s Crystal Ball is just the latest national ratings outlet to place Pennsylvania’s Governor’s race in a category that shows the office is up for grabs in 2022.

The Cook Political Report rated Pennsylvania’s Governor’s race as a Toss-Up in its initial ratings, while Inside Elections labels PA’s race under it’s “battleground” category.