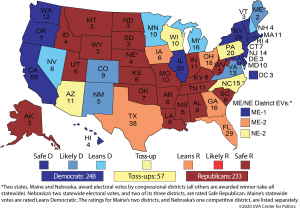 Pennsylvania remains up for grabs in the presidential election according to the most recent ratings update from the election analysts at Larry Sabato’s Crystal Ball.

In an article published on April 2, Sabato’s Crystal Ball kept Pennsylvania as one of four states in the Toss-Up column for the general election, which is the same rating as their previous rankings.

One of the “key points” listed in the article was that their presidential outlook has not “dramatically revised” from their previous ratings.

Neither party has the 270 electoral votes needed to capture the White House making the overall presidential race as a Toss-Up, although Kyle Kondik writes that Democrats are “nominally ahead now.”

While the presidential race is currently listed as a Toss-Up, none of the Congressional races in the state are placed in the same category. The four closest Congressional matchups in the state are for Reps. Matt Cartwright (D-Lackawanna), Brian Fitzpatrick (R-Bucks), Scott Perry (R-York), and Susan Wild’s (D-Lehigh) reelection bids with all of them in the “Leans” category to earn another term in office.