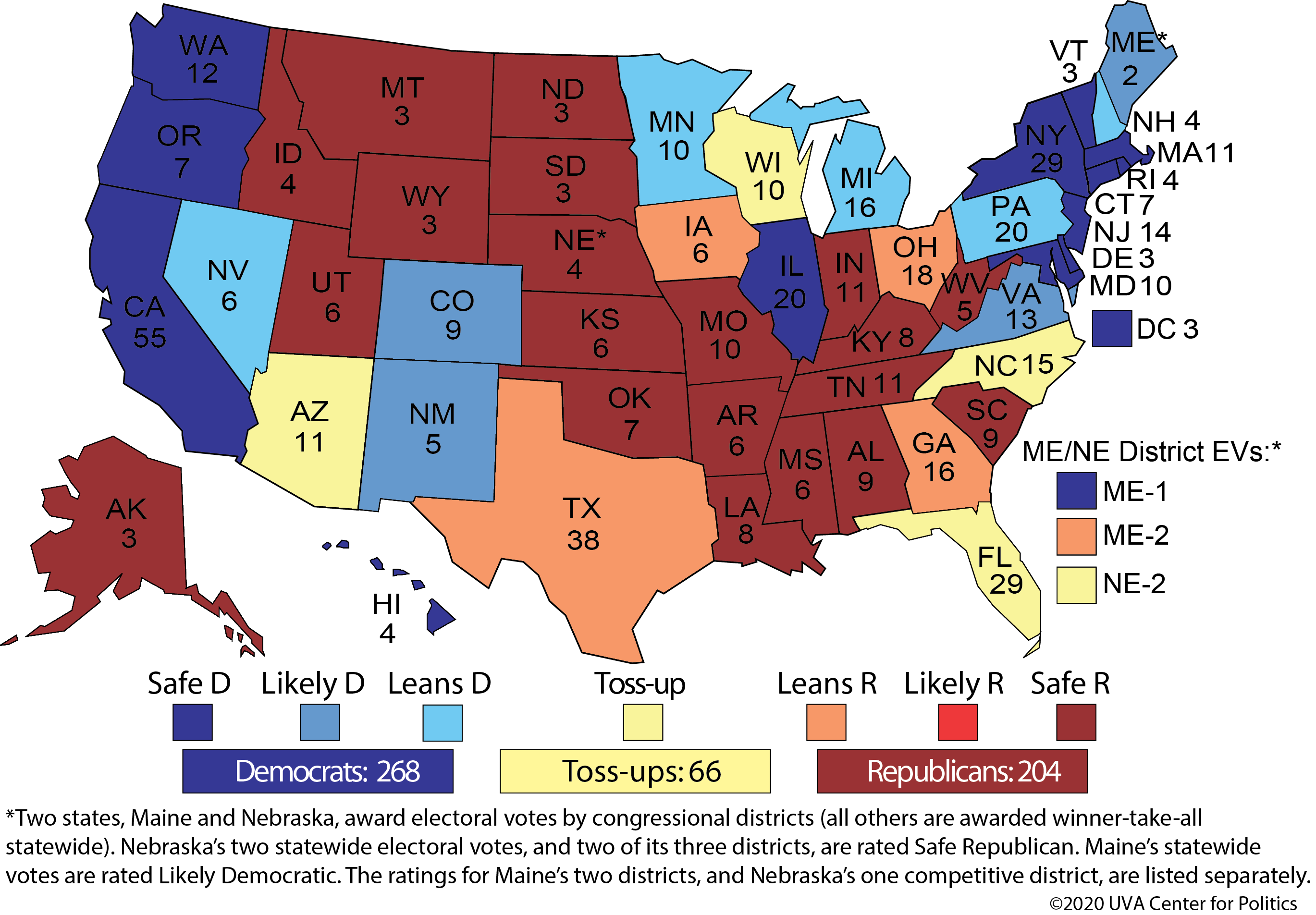 Pennsylvania shifts towards the Democrats favor in the presidential election, according to the most recent ratings update from the election analysts at Larry Sabato’s Crystal Ball.

In an article published on June 25, Sabato’s Crystal Ball moved Pennsylvania from Toss-up to Leans Democratic for the presidential race.

“At this point, we think there’s enough room for Biden to gain in suburban/exurban Pennsylvania to offset Trump’s big leads in outstate Pennsylvania, and not much reason to think — at this point — that Trump’s level of support outside the big metro areas will be significantly better than 2016,” Kyle Kondik writes. “That’s enough for us to push Pennsylvania toward Biden for now.”

In furthering his explanation of the rating change, Kondik compares Pennsylvania to Michigan, which is also currently listed as Leans Democratic, as a state that Trump was “able to squeak by in” during the 2016 presidential election over Sec. Hillary Clinton because “in large part because of great performances in outstate areas,” although former Vice President Joe Biden appears to be outperforming the previous Democratic presidential nominee in a few areas, coupled with certain regions of the state changing politically.

“Clinton did perfectly well enough in metro Philadelphia and Pittsburgh to win, but she got clobbered so badly outside the big urban areas that she narrowly lost the state to Trump,” Kondik writes.

“The recent changes in Pennsylvania illustrate the larger trends that animate the industrial north — places like Michigan and elsewhere,” Kondik continues. “Trump is hemorrhaging votes among white voters who have a four-year college degree, and who are heavily represented in suburban counties around big cities. That’s why Clinton ran ahead of Obama in much of suburban Philadelphia.”

While Trump successfully flipped three counties in Pennsylvania that previously voted for President Barack Obama twice – Erie, Luzerne, and Northampton, – the lone county in the state that went from voting for then-Gov. Mitt Romney in 2012 to Clinton in 2016 was Chester County, located in the Philadelphia suburbs.

“However, Trump added votes among white voters who do not hold a four-year degree, who are disproportionately represented in more rural/small city areas. A caveat that we’ll make now that we have made before: possessing or not possessing a four-year degree doesn’t say anything about someone’s intelligence, nor does it necessarily say anything definitive about a person’s income (one can be doing well economically without a degree, or be doing poorly with one),” Kondik writes. “But whether one holds a four-year degree has become a highly salient distinction among white voters.”

Kondik adds that Trump falling behind among white voters with a four-year college degree and non-college white voters “should be concerning” to his reelection chances.

“Something that should be concerning to the president is that recent national polling has shown him falling further behind with college whites, not matching his 2016 share with non-college whites, or both,” Kondik writes.

According to CBS News exit polling from the 2016 presidential election, Trump bested Clinton by 13 points among voters with a high school degree of less, and also edged out the Democratic nominee by 3 and 4 points respectively with voters with some college/associates degree and college graduates. Clinton’s lone advantage in this voting bloc in 2016 was with voters with postgraduate study, 59-to-37.

However, a recent New York Times/Siena College poll, which Kondik references in the story, shows Biden leading Trump by 10 in the Keystone State and making significant improvements in some of those voting categories in comparison to Clinton.

Kondik’s analysis further delves into the specific electoral shifts along education lines, while also pointing to Gov. Tom Wolf’s comfortable 2018 reelection bid as how Democrats are making up ground in the state.

“In his 2018 reelection, Gov. Tom Wolf (D-PA) lost ground in much of Appalachian Pennsylvania, but he more than made it up by improving in the metro areas throughout the state,” Kondik writes.

“Despite expanding his margin by seven percentage points from 2014, the only county he picked up was Cumberland,” Kondik writes, while adding that an above average number of residents in Cumberland County’s have a college degree. “By contrast, eight counties, scattered throughout the state, supported Wolf in 2014 but not 2018 — most of these counties, such as Cambria and Carbon, have historically strong ties with the declining coal mining industry and had a once-robust union presence, which buoyed Democratic margins. In all eight counties, a lower-than-average number of residents hold four-year degrees.”

Kondik’s analysis includes a map of Wolf’s margin of victory in the state in comparison to his 2014 victory, which shows Wolf improving in the Greater Pittsburgh, south-central Pennsylvania (Harrisburg/York), and southeast Pennsylvania, (Greater Philadelphia).

Kondik also cites a fews Democratic internal polls from Pennsylvania’s 1st and 10th Congressional District that show Biden performing well in purple counties. He notes that although the partisan polls that are released, “usually paint a rosy picture for the side that releases them,” that “we’ve seen and heard about enough polling in similar kinds of places across the nation that these surveys may not be that far from the mark.”

He writes that Democrats “appear to have room to grow” in the 1st, 10th, and 17th Congressional Districts.

Neither party has the 270 electoral votes needed to capture the White House, although Kondik writes that it’s “fair to say” that Biden is “emerging as a favorite in the presidential race. Not necessarily an overwhelming favorite, but a favorite nonetheless.”

Sabato’s Crystal Ball doesn’t have any of the Congressional races in the state listed as Toss-ups, but has the reelection bids for Reps. Matt Cartwright (D-Lackawanna), Scott Perry (R-York), and Susan Wild’s (D-Lehigh) as “leaning” in the incumbents favor.