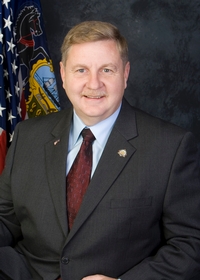 State Representative Rick Saccone (R-Allegheny) has confirmed he will run for U.S. Senate in 2018.  He filed paperwork with the Federal Election Commission and said will kick off his campaign in late February.

“The values of the people of Pennsylvania are my values, and are the values that got Trump elected in Pennsylvania,” Saccone told PoliticsPA.

Saccone said he is not running for the Senate simply as a State Rep, but as the culmination of all of his life experiences.

“I am running as lots of different things, I am retired from the Armed Services, I have written nine books, I am a foreign policy expert, among many other things,” Saccone said.

Saccone served in the Air Force for over ten years.  He remained in South Korea after his retirement from the Air Force to host an english language newscast.

Saccone also holds a Ph.D. and has taught classes at Saint Vincent College.

Elected in 2010, he has established a reputation as one of the most conservative members of the state House. Statewide, he is best known for legislation that would require schools to display “In God We Trust,” and for a resolution to name 2012 “The Year of the Bible” in Pa.

According to a Pittsburgh Post-Gazette profile from 2010:

After he retired from the Air Force, Mr. Saccone spent time in both North and South Korea in a number of capacities.

He worked as a news anchor for an English-language TV station, he wrote for Seoul newspapers, he taught English at Korean institutes, and he held international business positions with American and Korean companies.

During President Bill Clinton’s administration, he represented an international organization in North Korea that was building nuclear power plants as part of a $5 billion project.

He said he gained invaluable diplomatic and negotiating experience as an American living in North Korea at the time, which led him to write two books — “Living with the Enemy: Inside North Korea” and “Negotiating with North Korea.”