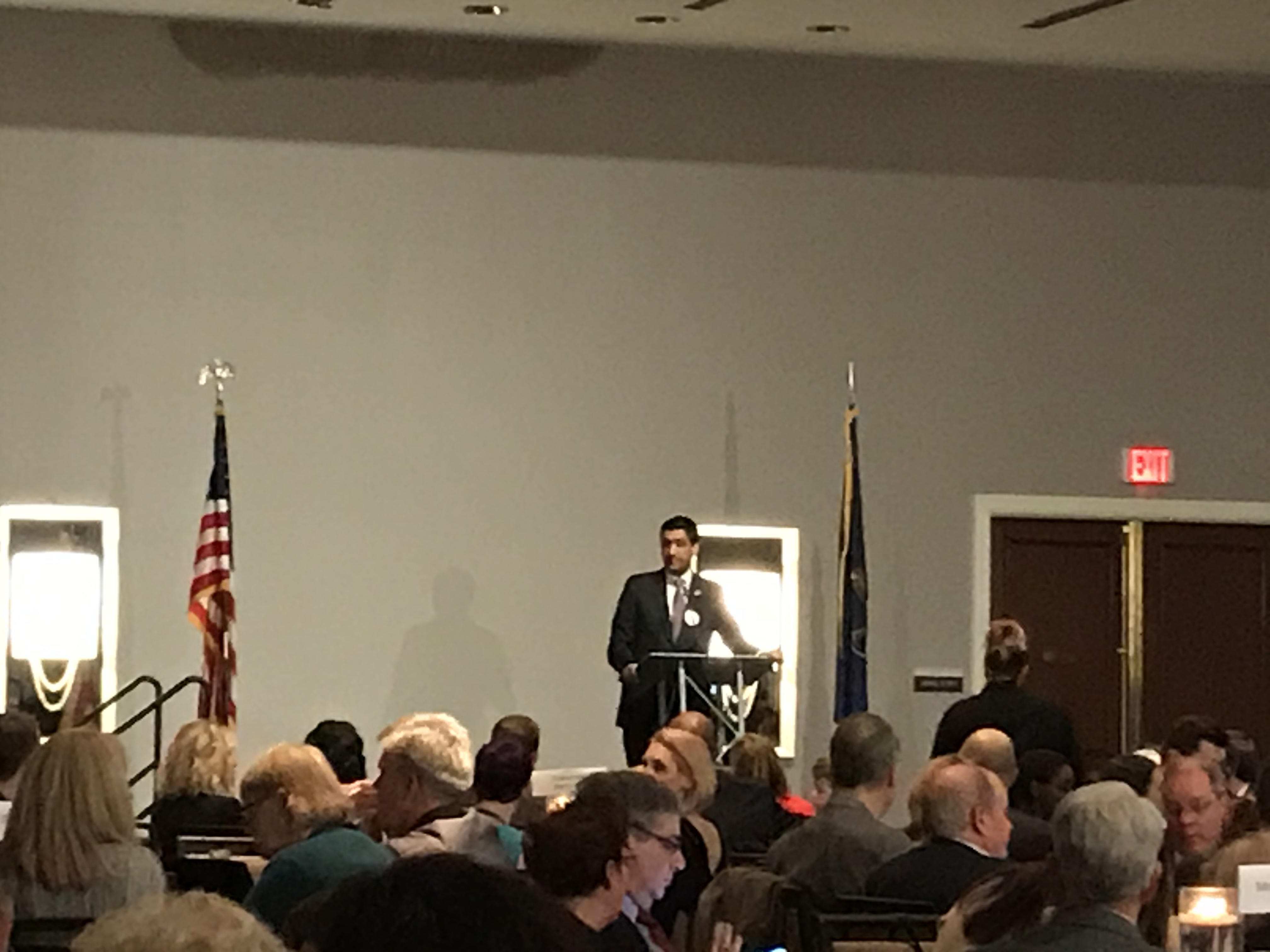 While Khanna’s address didn’t center around the Sanders campaign, his nearly 15 minute speech to a room full of Pennsylvania Democratic state committee members stressed the need for the party to provide an economic message that he believes will resonate with all voters, but specifically those who have felt left behind in the 21st Century economy.

“I believe our party should stand for a very simple principle,” Khanna said. “No person should have to leave their hometown to get a good paying job.”

Khanna represents California’s 17th Congressional District which is home to tech giants such as Apple, Google, Intel, Yahoo, and Cisco, an area which he described as “arguably the most powerful economic district in the world.” He said representing this district in Silicon Valley has shown him that the country is going through a “technology revolution,” which he said was similar to the “industrial revolution and the agricultural revolution.”

He viewed the current revolution as providing positives and negatives to society: the positives being that technology has made advancements in healthcare, communication to those around the world were just a few examples he mentioned, but added that it has helped contribute to a concentration of wealth in just a few parts of the nation.

As a result of these negatives, he believes this change in the economy caused people to vote for change in the previous presidential election year.

“You wonder why people voted for change in 2016,” Khanna asked the crowd. “They were frustrated… they get that the economy is changing, they didn’t feel like they had a steak in it.”

For the first time since 1988, Pennsylvania voted for a Republican presidential candidate, which played a significant role in helping put Donald Trump into the White House.

Khanna’s message to winning back some of these voters was to make investments in infrastructure, universities, and other communities that have felt left out, while also sharing an anti-war sentiment that played very well with the state committee members.

Khanna believes it is incumbent upon the Democratic Party to attack Trump for his promises to voters in 2016 about infrastructure and manufacturing saying they can’t “let him get away with it.”

In an interview with PoliticsPA after his address, Khanna said he believes Sanders could win over these voters and is capable of carrying states like Pennsylvania. Khanna added that an “economic populist message” is needed from the Democratic Party and he will support whoever the nominee will be.

“I will support whoever the nominee is, but I think we need an economically populist message that speaks to places that have been left behind,” Khanna said.

Khanna even tied in economics while talking about healthcare saying that the Democratic Party healthcare plans are “pro-business” and would benefit the overall economy of the country.

While Khanna detailed economics at length, most of the Pennsylvania Democrats focused on healthcare as the key issue to talk to voters about in the upcoming election.

Rep. Conor Lamb (D-Allegheny) was very vocal in criticizing Senate Majority Leader Mitch McConnell (R-KY) over various positions, but specifically detailed the issue of prescription drug prices as an issue that he believes should unite all voters.

“I can tell you that no matter where you go, the issue of bringing down the high prices of these prescription drugs is not just a majority Democratic position,” Lamb said. “It’s majority American.” 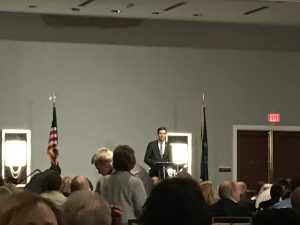 Lamb said that the Democratic Party would oppose any cuts to Medicare and Medicaid that he believes Republicans will try to push, providing a clear contrast between the two parties.

“Let’s be very specific about this,” Lamb said. “We’re giving people glasses, hearing aides, and dentures. That’s what we’re offering to the American people in 2020.”

Highlighting the importance of healthcare, the Pennsylvania Democratic Party rolled out a new campaign called “PA Dems Care”, which PA Democratic Party Chairwoman Nancy Patton Mills said will pinpoint the issues that matter to most in the state which include healthcare, education, and jobs.

Although Trump was on the minds of everyone in the room over the weekend, the message on Friday night also included winning races at the local level. The Republicans have held a majority in both the state House and state Senate over the past several terms, but Democrats believe they are in striking distance.

State Rep. Leanne Krueger (D-Delaware), who is the chair of the Pennsylvania House Democratic Campaign Committee, touted the gains the party made in 2018 and said that the biggest sign that they can take over the House was the recent news that Speaker Mike Turzai (R-Alleghen) announced that he wasn’t seeking reelection.

“The biggest sign of all that your work is paying off, just last week Speaker Mike Turzai announced that he was resigning from the House,” Krueger said.

“That is a victory for all of us,” she continued. “You scared him into retirement.”

The Cook Political Report recently rated the state House and Senate in Pennsylvania as Leans Republican.

On Saturday afternoon, state committee members convened to endorse candidates for the three statewide offices on the ballot in 2020: Attorney General, Auditor General, and Treasurer.

The meeting ended with the lone contested race, Auditor General, without an endorsed candidate, although the seven candidates were able to make a very brief pitch to state committee voters.

Pittsburgh City Controller Michael Lamb was the highest vote getter after one round of voting, but did not surpass the two-thirds threshold needed for the endorsement. After the first round of voting was completed, he suggested that the party bypass the second vote and have it as an open primary, which led to the loudest applause at the Saturday gathering.

Prior to the vote, Lamb touted his record as City Controller in Pittsburgh, saying that the finances in the city are in much better shape since being elected to the office and said it was important to have a Democrat from western Pennsylvania on the ballot in the upcoming election.

Christina Hartman, a non-profit leader and former Lancaster County congressional candidate, talked about the need to carry on the work that outgoing Auditor General Eugene DePasquale was doing, and in addition to believing her previous experiences could help her properly lead the office, she said that she could draw out white suburban women voters that voted for Trump in 2016 and bring them back to the Democratic Party.

Tracie Fountain, a Certified Public Accountant who served in the Pennsylvania Auditor General’s office for 29 years, detailed her experience in the office as proof that she could lead the office on day 1 and added that a “qualified woman of color would do a lot to unite voters in Pennsylvania.”

Rose Marie Davis, a Certified Public Accountant and vice chair of the Smithfield Township Board of Auditors, said the office played a critical role in the state and her 34 plus years of auditing would lead to meaningful results.

State Rep. Scott Conklin (D-Centre) detailed his experience in public office from serving as a county commissioner and in the state House, but attempted to distance himself by saying that the party needed someone who represents more conservative parts of the state and said that he would not neglect the “T” and help deliver those voters to the party in 2020.

Nina Ahmad, former Deputy Mayor of Philadelphia, talked about her upbringing and described herself as a “fighter” and said that “public policy that helps the most vulnerable is the most cost effective.”

Alan Butkovitz, former Philadelphia City Controller, talked about the important role Philadelphia plays in electing Democrats, saying that he’d be able to get every vote he could out of the city.

Attorney General Josh Shapiro, who was elected to the office in 2016, received the state party endorsement by a voice vote.

“It is my honor to be your endorsed candidate,” Shapiro said. “We’ve come a long way together.”

Shapiro went over a number of issues that he addressed during this term and specifically mentioned the need to continue addressing opioid addiction, gun violence, protecting consumers, clergy sex abuse, and more.

Treasurer Joe Torsella, who was also elected to the statewide office in 2016, received the state party endorsement by a voice vote.

Torsella said he made three pledges while taking on the office; restore integrity, be a tough fiscal watchdog, and stand up for all Pennsylvanians to create more economic opportunity. While he touted the work his office has done since being elected, he also talked about the importance of the upcoming election and dropped a name that has been rumored as an office he could possibly seek in 2022.

“We’re going to put an end to the single most corrupt, incompetent and dangerous presidency in American history,” Torsella said. “We will show Pat Toomey and the Republican members of the US Senate that even if they forgot to read their constitutions, we haven’t and we the people have some long memories.”