Sanders Promotes Medicare for All, While Rallying Against Hahnemann Hospital Closure in Philly 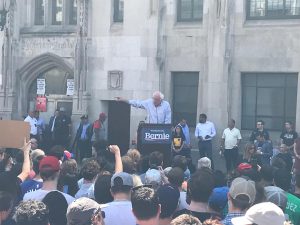 Keep Hahnemann open and push Medicare for All.

“It’s not complicated,” Sanders said. “At a time when our country faces a major healthcare crisis, when 80 million Americans are either uninsured or underinsured, including tens of thousands of people here in the Philadelphia area. We should be moving, we must moving forward to guarantee healthcare to all people as a right.”

Last month, the hospital announced its plans to close in September citing financial hardships. CBS Philly reports that 2,000 jobs are predicted to be lost when the hospital shuts down, while Sanders delivered direct shots at the hospital ownership claiming they want to make money off of the property’s real estate.

“We should not be talking about shutting down a major hospital and converting that property into hotels or condos or into some other real estate opportunity,” Sanders said.

“Today, we send a very loud and clear message to Mr. Joel Freedman, the investment banker from Los Angeles,” Sanders continued. “That message is as simple as one can imagine and that is do not shut down this hospital. Work with local officials, work with the unions and the people of this city and keep this hospital open.”

“We are prepared to spend $15 million from the state and city, to be matched by the federal government, for viable solutions to address gaps in service and continuity of care for Hahnemann patients, and incentivize a long-term solution to emerge to serve the community at this site,” Kenney and Wolf said in a statement. “We need the federal government to step up and join us in protecting these patients and workers. The White House and Congress must be equally invested in protecting patient care in Philadelphia and they should match any state and local funds committed to that goal. We will work with our partners in the Senate and House to fight for federal support.”

The release from Kenney and Wolf said they are fighting to keep the hospital open, but said at this point “there is no means to provide public funding to bail out the current owners” who owe the state and city $40 million already. 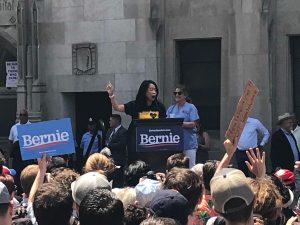 Gym, who took the stage before Sanders, described the situation as their “line in the sand” and said she appreciates the funding from the state, but doesn’t believe it is enough.

“So Governor Wolf, I want to thank Gov. Wolf for the $15 million he put in with the city of Philadelphia,” Gym said. “It’s a start, but I’ll say right now it’s not enough.”

“It’s time for you to get out of Harrisburg and come down to our city,” Gym continued. “We are your people. This is our movement and our city needs you to be with us right now.”

Sanders talked Monday afternoon about introducing legislation in the Senate to reserve $20 billion in emergency funds to allow states and local government purchase hospitals that are struggling financially.

This rally and call from Sanders comes just hours after former Vice President Joe Biden released his healthcare plan on strengthening the Affordable Care Act, providing a wedge between the two frontrunners in the Pennsylvania polls.

Both polls had Biden and Sanders as the only Democratic candidates beating Trump in a hypothetical head to head matchup outside the margin of error in the state.

This was Sen. Bernie Sanders second campaign visit in the state since he declared his candidacy, following a three-stop swing in Bethlehem, Luzerne County, and Pittsburgh in April.