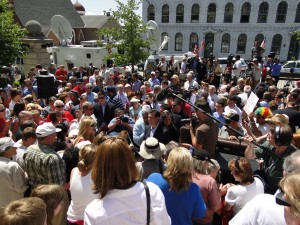 Lowman Henry and the Pennsylvania Leadership Conference is getting a visit from an old friend. Former Sen. Rick Santorum, hot off of his wins in Alabama in Mississippi, will speak at the conference in Harrisburg on March 24.

The PLC is an annual meeting of movement conservatives in Pa. – Santorum’s home crowd. However, these are many of the activists who supported Pat Toomey in the 2004 primary versus Arlen Specter. It should provide a glimpse of how solid Santorum’s support is in Pa.

And now that it’s clear that the presidential primary is coming to Pa., don’t be surprised to see some of the other contenders join the guest list.

Harrisburg, PA – The campaign for the Republican Presidential nomination will come to Pennsylvania on Saturday, March 24th when former United State Senator Rick Santorum will address the 2012 Pennsylvania Leadership Conference. The premiere annual gathering of conservative activists each year will be held March 23rd and 24th at the Radisson Penn Harris Convention Center in Camp Hill.

Four interactive panel presentations will constitute the policy core of the conference with topics set to include: Right-Sizing State Government; Marcellus: How Shale We Proceed; Obama’s Regulatory Overkill; and Reagan-izing the PA GOP. The Constitution Organization of Liberty (COOL) will present a pre-conference seminar on the Bill of Rights. Also scheduled for Friday morning, March 23rd, is an activist training workshop conducted by the Americans for Prosperity Foundation and the Franklin Center for Government and Public Integrity. The Franklin Center will also sponsor a Saturday afternoon seminar on utilizing video in messaging.

The Heritage Foundation and the Family Research Council will be sending their “Values Bus,” to promote voter registration efforts.

Registration and complete information on the 2012 Pennsylvania Leadership Conference is now available at www.paleadershipconference.org.