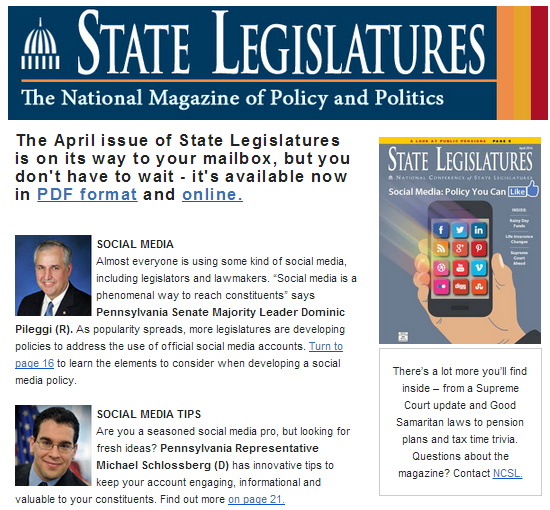 In an article featured in the April edition of the magazine State Legislatures, State Rep Michael Schlossberg (D-Lehigh) and State Senate Majority Leader Dominic Pileggi (R-Chester) discuss the benefits of social media’s unique place in the lives of lawmakers.

The article, which is clunkily entitled “Almost everyone is using some kind of social media, including legislatures and lawmakers,” Pileggi touts the role social media can play in reaching out to voters.

“Social media is a phenomenal way to reach constituents,” he says in the article. “As a policymaker, I find the direct, immediate feedback to be tremendously helpful.”

Schlossberg, a young first-term Rep. who hosts a blog about social media and politics, discusses how he believes using social media is just part of the job for lawmakers nowadays.

“We have finally hit a point where being an elected official on Facebook is no longer unique, but practically a job requirement.”

“To get constituents to connect with an elected official on social media, they have to want to get to know that official on a deeper level. They want to see what a day is like for their representative and where he or she stands on issues. Constituents want to get information that is relevant to their lives.”

Schlossberg recommends lawmakers post “Where Am I?” photos on Facebook, host Town Hall Twitter meetups (which Schlossberg recently did on LGBT issues), record videos of how they voted on important issues, and more.

But as Pileggi points out, as social media expands and becomes ever more ubiquitous, ethical questions will arise.

“Using social media presents some new and important ethical questions related to how to maintain a proper division between legislative work and campaign work,” Pileggi says.

The article is good exposure for the two Pa. lawmakers, but in the end, all Senators and Representatives, at the state or national level, are finding it harder and harder to avoid having a presence on social media.