Update: PoliticsPA obtained a copy of the polling memo from Schwartz’s campaign (below), which held a press call on the poll Wednesday afternoon.

A few interesting items from the memo and the call:

Mark Bergman is leaving his position with Schwartz’s direct mail firm to serve as her campaign spokesperson.

Bergman said the campaign released the polling today not in response to the changing race (i.e. Wagner’s interest), but instead because they wanted to complete the primary and general polling.

Corbett’s job approval was negative, but only slightly (50% disapprove, 46% approve).

The most interesting aspect of the poll was that it dealt directly with Schwartz’s past work at a Philadelphia health clinic that provided abortions.

“A lot of people have said, variations on the theme, that they think that Allyson Schwartz is going to have difficulty winning the general election because of her work with the Blackwell Center,” said pollster Pete Brodnitz.

He said that when the campaign has the chance to push back against the initial stigma, they win. Of the two issue descriptions below, respondents chose the pro-Schwartz response 51% to 33%. They broke out white Catholics, who supported the Schwartz position by 56% to 29%.

Here are the competing questions the pollster asked.

1) Supporters of Tom Corbett say prior to running for Congress, Schwartz ran an abortion clinic in Philadelphia. In Congress and the State Senate, she has pushed a pro-abortion agenda, including opposing parental notification, supporting partial birth abortions, and voting against the Religious Freedom Act.

2) Supporters of Allyson Schwartz say she helped found the non-profit Elizabeth Blackwell Health Center to provide access to quality, affordable health care. While the center did provide legal abortion services, Schwartz’s goal was to reduce the number of abortions by helping women get access to better health care and contraception to avoid unwanted pregnancies. 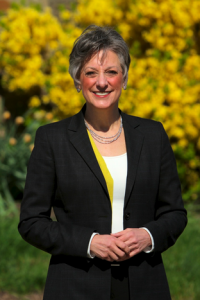 Allyson Schwartz’s campaign wants Jack Wagner, the former Pa. Auditor General who this week floated the possibility of running for Governor, that there isn’t room in the Democratic primary field.

An internal poll released by Schwartz’s campaign to the Pittsburgh Post-Gazette shows the Congresswoman ahead of her rivals in a multi-way Democratic primary.

A second internal poll shows her ahead of Gov. Tom Corbett in a general election.

In a four-way matchup of candidates for the Democratic nomination Schwartz takes 34% to 15% for former DEP Sec. Katie McGinty, 11% for former Revenue Sec. Tom Wolf, and 10% for state Treasurer Rob McCord. 30% are undecided.

Schwartz pollster Beneson Strategy Group polled 800 likely 2014 primary voters from July 16 to 18. The margin of error is plus or minus 3.46%.

Schwartz lead in Philly with 61%, but more narrowly in Pittsburgh with just 15%.

It was conducted more recently, from August 6 to 8. It included 600 likely general election voters and had a margin of error of plus or minus 4%.

As with any internal polls, the results should be taken with a grain of salt. Schwartz’s campaign did not respond to multiple requests by PoliticsPA to see the polls.* The information released to the Post-Gazette appears to have been only a polling memo. Pollsters often craft two memoranda about a survey: one for the public, that plays up the favorable results of the poll; and one for the campaign, which paints a more nuanced picture.

Timing is everything. Schwartz waited until Wednesday to release a poll that was conducted more than a month ago – and she released it first to Wagner’s home town newspaper. The biggest change in the race since the poll was conducted in mid-July is the emergence of Wagner as a possible candidate.* He told several reporters that he would soon decide whether to run.

So far, the Democratic primary field lacks a western Pa. candidate. None of the dozen declared or undeclared candidates resides more than 15 miles west of the Susquehanna River.

Wagner, a well known western Pa. Democrat (who finished 2nd in the primary for Governor in 2010) would significantly alter the dynamics of the campaign. Indeed, Schwartz’s poll found 48% of Democratic primary voters in the Pittsburgh region were undecided.

The memo release could also be a final effort to dissuade McCord, who is widely expected to formally jump into the race sometime after Labor Day.

Here is the full memo: