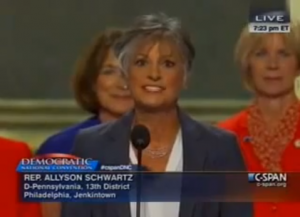 PA Rep. Allyson Schwartz delivered about 90 seconds of remarks at the Democratic National Convention Tuesday, stressing the importance of a strong safety net for seniors.

“As a daughter who cared for an elderly parent, I know medical care is not optional for seniors,” Schwartz said. “We will not let the Republicans end the guarantee of Medicare, which could cost seniors thousands and endanger the health and retirement security of millions of Americans.”

Schwartz emphasized that all Americans work and pay for Medicare, thus they “deserve the security Medicare provides.” She adds that the choice is clear on who will be able to make the right decisions on Medicare.

“President Obama will strengthen and protect Medicare. Democrats will make the tough choices—the right choices—to reduce the deficit and to preserve Medicare, for this generation and the next.  The Democratic women of the House know that a secure retirement moves America forward.”

Schwartz voted for the President’s health care law, but as a vocal advocate for the medical community has also lobbied to repeal one of its more significant provisions: the IPAB. The Independent Payment Advisory Board consists of 15 health care professionals with the aim of streamlining Medicare with reimbursement rates as their primary tool.

Tom Fitzgerald of the Philadelphia Inquirer is in Charlotte and noted the increased chatter that Schwartz, due to her ascending profile in the Democratic party, could be preparing for a run for Governor or U.S. Senate in the years ahead.

For years she’s been a party-building and fundraising powerhouse and is also considered a potential candidate for party leadership in the House.

“The effects of President Obama’s failed economic policies have been particularly devastating to women, who now face record high poverty levels and unemployment.  After three-and-a-half years of failing to get the job done, it’s clear Pennsylvanians aren’t better off and can’t afford four more years of President Obama.”

Schwartz’s Republican challenger Joe Rooney also weighed in her comments in an email response, calling the incumbent Congresswoman out of touch with her district, and the issues.

“Yesterday, I paid $4.09 for a gallon of gas. Our national debt has exploded past $16 trillion, we have almost four straight years of unemployment over 8.2 percent. Black unemployment is over 14 percent and youth unemployment is over 25 percent. Allyson Schwartz displays an incredible disconnect not only from the voters of PA-13, but from the electorate in general.”

Rooney said the economy, jobs and the debt should be the three main concerns, with a focus on creating pro-growth policies.

“We need…a flatter, fairer tax structure; we need to ease the regulatory burdens on businesses; we need to develop all our vast energy resources and we have to address the looming massive tax increases that threaten our economy this coming January 1.”

Rooney goes on in the response to challenge Schwartz to six debates, saying he “looks forward to addressing Medicare, the economy and other issues which are of critical importance” to the people of the district.