“Tom Marino is not for us, never has been, and never will be.”

Democrat Phil Scollo, the man challenging Rep. Tom Marino (R-Lycoming), is out today with his first television ad. He doesn’t go for subtlety.

The 30 second spot throws several punches and is set to air tomorrow night during the Presidential Debate. 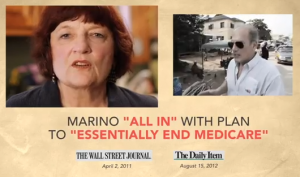 It focuses on  GOP plans to reform Medicare and a defense budget that could threaten the base at Tobyhanna, a major local employer.

However, Scollo’s citation for the “essentially end Medicare” claim was refuted by FactCheck.org because it takes out of context a report by the Wall Street Journal.

The ad buy includes both broadcast and cable in the Harrisburg and Wilkes-Barre/Scranton markets, the campaign said. A quick review of Federal Communications Commission reports by Scranton-area broadcast stations didn’t reveal any filings.

Scollo’s campaign boasted that the ad will run at a higher daily point level than the first week of Carney TV (the last time a Democratic challenger defeated a Republican incumbent in the 10th district) back in 2006 – proving promising for Scollo.  However, Carney’s ads began airing in August of that cycle.

The spot was produced by Caucus Media, whose President Andrew Eldredge-Martin is Scollo’s spokesman.

Marino’s campaign dismissed the attacks, saying the Congressman’s votes were aimed at preserving Medicare for the future – and wouldn’t affect current retirees.

“We are disappointed that Mr. Scollo has decided to attack and distort Tom’s proven record of fighting to keep taxes low on our middle class families, protecting Medicare for current or near retirees, while supporting solutions that will strengthen and secure Medicare for generations to come, and reducing government spending,” said Marino Campaign Manager Ryan Barton.

“Instead, Mr. Scollo should be explaining to the hardworking taxpayers of Pennsylvania why he has not paid his taxes.”

However, his business background and personal finances have made headlines in recent days, most notably over the fact that he faces federal and state tax liens of over $44,000.

Scollo attributed the debt to medical expenses incurred by him and his wife over the past several years.