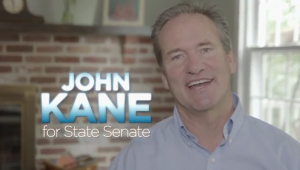 There was an unexpected development today in the race for the State Senate’s 26th district.

A report by Victor Fiorillo of Philadelphia Magazine highlighted a Facebook post by Stella Holgerson. She is claiming to be Kane’s daughter from a previous relationship.

Holgerson seemed to take offense at one of Kane’s ads, which features his family.

“He [Kane] claims to be a family man, launching his campaign with a commercial with all of his children in it,” she wrote in her Facebook post. “Well, that commercial is missing someone. Me.”

“Let’s be honest: I am upset,” she told Fiorillo. “It really bothers me. He’s this big family man, he’s got his children on TV, it’s crazy to me. The way I look at it, he’s a liar. And I’m not trying to get him back anymore. You can’t miss something you never had.”

According to Holgerson, she never had any relationship with her father and only met him once.

Kane and his campaign have neither confirmed nor denied her claims.

“As a candidate for public office, John may be fair game, but his family and the young woman who believes that she may be his daughter are not,” Kane spokesman Aren Platt wrote. “This is not a political matter, has absolutely no relevance to this election, and does not belong in the public discourse.”

Of course, this is a personal matter for Kane. Yet with the 26th district being perhaps the most competitive and highly-watched (not to mention contentious) State Senate race of the year, it’s impossible not to wonder what effect this could have on his candidacy.

Still, Platt maintains this will be the last time the candidate addresses the issue.

“John, Stella and all the members of the Kane family deserve the privacy to work through this matter on their own. This would be a painful development for any family at any time, but John is focused on helping all involved move forward together as he also fights on in the last two weeks of this competitive campaign, and will have no further comment.”