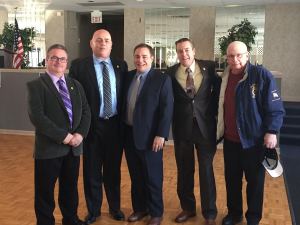 We officially have a race.

At a fundraising event hosted by Teamsters Local 107, Sabatina laid out what his plans are for his second term, noting that he has four main areas of focus: education, economic growth, the livability of the Northeast, and public safety.

“We need to invest in education now, not incarceration later,” he stated. “I have been fighting to keep our neighborhoods safe for years. I promise to use what I learned as a prosecutor to make Northeast Philadelphia a great place to raise a family.”

This announcement comes just days after Boyle jumped into the race and received the endorsement of the Philadelphia FOP.

The two will meet in the Democratic primary on April 26th to decide who’ll represent the 5th district.

Finally, Sabatina also announced some veteran additions to his campaign staff that are included below:

Alex Navarro-McKay – Alex is a veteran war room strategist who manages BerlinRosen’s campaign consulting and creative services group.   He has been lead consultant for more than four-dozen races nationwide.

Will Hailer – Will is a Vice-President at BerlinRosen.  He has managed campaign staffs as large as 350 people, and is a veteran of numerous statewide, local, and federal efforts.

Marc Silverman – Marc is an experienced Pennsylvania pollster, having worked for dozens of state House, state Senate, and Congressional races in PA.

Gordie Loewen – Gordie has been held many titles in an extensive political career, including research, communications, and policy roles on a variety of campaigns. Now, his company Gordie Loewen Research has done projects for the DCCC, Emily’s List, and many others.

Kristen Stoner – Kristen and the St. Bernard group have over 19 years of experience in electoral politics.  She has been the primary fundraiser for Democrats at the local, state, and federal levels, including state Senators, City Council members, and Members of Congress.