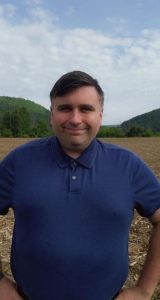 A Centre County Democrat has entered the race to challenge the highest ranking Republican in the state Senate.

“Although I have been involved in governing at a local level since August of 2018 when I was appointed, I have always held an interest in working with and for the community,” Zeigler said. “Thinking outside of the box and being driven to finding solutions to help better my community is something I have done for a few years.The same thoughts that worked 30 years ago don’t work now and that has to be recognized. Just like everyone else, I want to help give my kids a better tomorrow.”

Zeigler, who was appointed to Millheim Borough Council in August 2018, was elected in 2019, and has served as Council President since January 2020.

Zeigler describes himself as a “practical progressive” on his campaign website, while saying in his press release that local Republicans call him a “do something Democrat.”

Under the platform section of his campaign website, Zeigler stresses (ART), accountability, responsibility, and transparency.

Corman said he’s focused on his duties in the state Senate and will make a decision about whether to run for reelection after the 2021 election.

“Right now, my focus remains on doing my job as Senate President Pro Tempore to the best of my ability and ensuring our local communities recover from the COVID-19 pandemic,” Corman sent, through a spokesperson, in an email. “Although some candidates are already jockeying for position for the 2022 elections, I do not plan to make any announcement regarding my candidacy for office in 2022 until after the 2021 municipal election.”

“As I have always done, I plan to sit down with my family and have an open and honest conversation before making any final decision about what our future holds,” Corman continued.

Although Zeigler didn’t mention Corman by name he took a clear shot at the longtime incumbent, who was first elected in 1998 and took over the seat previously held by his father, J. Doyle Corman, who also previously held the seat for more than 20 years.

“Unlike some elected leaders who appear to inherit their positions, I believe it’s best to earn such a role and I think I have the opportunity to continue to do that at a higher level,” Zeigler said in his campaign announcement.

Zeigler is currently the lone Democrat to formally announce a bid for the seat in 2022.

Corman is currently serving his sixth term in the state Senate. He bested Democrat Ezra Nanes by 11 points in his most recent successful reelection bid in 2018.

The 34th state Senate District includes all of Centre, Juniata, and Mifflin counties, and part of Huntingdon County, although the current boundaries are likely to change during reapportionment.