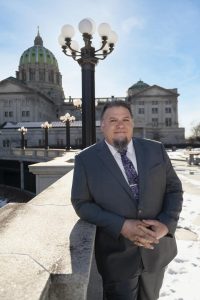 The race for the special election in the state Senate’s 48th District continues to grow.

Tim McMaster, an IT analyst who resides on a farm, has launched a campaign as a Libertarian candidate for the upcoming special election in May, PennLive reports.

McMaster promotes not being a career politician on his campaign website and said he intends to “Make Pennsylvania Free Again!” if elected to office.

“I am a concerned citizen who wants to make a difference in my town, my county, my state and my nation,” McMaster writes on his campaign website. “I will fight against all legislation that further restricts your liberty, digs deeper into your wallet or increases Harrisburg’s control over your life, livelihood and family.”

“This campaign isn’t about me. It’s about you,” McMaster continues. “It’s about freedom and liberty. And it’s about making a real change to Harrisburg’s crony politics.”

In a press release announcing his candidacy, McMaster cites being “disgusted with the corrupt, incompetent government’s waste, stealing and abuse,” as the reason he entered the race, while also stressing the goal of “limiting the involvement of government in your lives,” if elected.

McMaster lays out a number of positions under the issues page of his campaign website, including his support for fully opening Pennsylvania’s economy with “no governmental restrictions” on day one, reducing property taxes, supporting school choice, decriminalize victimless crimes, and more.

McMaster is one of at least four candidates running in the upcoming special election.

Chris Gebhard, president and CEO of Hoaster Gebhard & Co., was nominated as the Republican candidate for the race, while Democrats will meet on March 13 to select their candidate. Former state Rep. Ed Krebs has launched a campaign as an Independent.

The 48th Senate District includes all of Lebanon County, and parts of Dauphin and York counties.