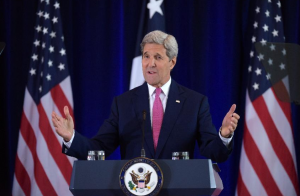 Secretary of State John Kerry campaigned for support of the Iranian Nuclear Deal at the National Constitution Center in Philadelphia on Wednesday.

In his speech, Kerry defended the hotly contested agreement as a prominent and timely step towards a safer, more peaceful world.

Kerry said the deal, “sets us on the road to greater stability and security but doesn’t require us to give up any option at all. To vote down this agreement is to solve nothing.”

“Rejecting this agreement would not be sending a signal of resolve to Iran, it would be broadcasting a message so puzzling that most people across the globe would find it impossible to comprehend,” Kerry warned his audience.

Republicans have fiercely opposed the deal and plan to present a resolution of disapproval in the House and Senate by the beginning of next week.

Last Tuesday, Sen. Bob Casey became the 32nd senator to announce his support of the accord with Iran.

“This agreement will substantially constrain the Iranian nuclear program for its duration, and compared with all realistic alternatives, it is the best option available to us at this time,” Casey wrote a 17-page explanation.

Following the speech, PoliticsPA spoke to Mayor Nutter who offered his support to President Obama and Secretary Kerry:

“Secretary Kerry’s speech really made the case for why the Iran nuclear agreement should be supported. He laid out an array of details that quite frankly we aren’t hearing in other places, certainly that we aren’t reading that level of detail in much of the press. I think that this is a situation where you know if folks can just read the information that they need to better understand it, the way Secretary Kerry put the pros and cons, I think in the end of that discussion, that thought process, you’ll realize that this is the best agreement we can get. There are many, many protections in the agreement. All of us, speaking for myself personally, are deeply concerned with the safety and security of Israel and many of the neighboring countries and also the United States of America. I think it is time to move forward and we need to support President Obama in his efforts to bring peace to the world.”