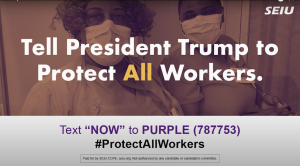 The nation’s largest union of healthcare workers and service workers is hitting President Donald Trump over his response to COVID-19 in a new digital ad campaign.

SEIU launched the six-figure campaign in eight battleground states, including Pennsylvania, earlier this week, with an ad featuring several healthcare workers calling for increased protections as they battle this virus, while saying Trump “need to show leadership” on the matter.

“This experience has been like no other,” said Elizabeth F., a pharmacy technician, at the beginning of the 30 second ad.

The ad continues to feature other healthcare workers saying that they are in a “fight” for masks, gloves, and hand sanitizer, while clips of Trump are included with him questioning the amount of equipment needed to combat the virus and asking where the masks were going in the hospitals.

“President Trump needs to show leadership and make sure that all essential workers are protected,” Elizabeth F. says at the conclusion of the ad.

A release from SEIU says that the ad campaign will run in both Spanish and English and intends to reach 2.6 million infrequent voters of color in the eight battleground states it is running in.

“Over half of SEIU’s members are from Black, Latinx, or Asian American and Pacific Islander communities, which have been disproportionately impacted by the Covid-19 pandemic,” the release adds.