SEIU to Corbett in New Ad: Expand Medicaid (With Video)

The commercial does not throw any punches at the Governor, who has expressed hesitance at the idea of expanding Medicaid as provided by the Affordable Care Act, also called Obamacare.

Instead, Pittsburgh nurse Susan Baker makes the case for expansion. 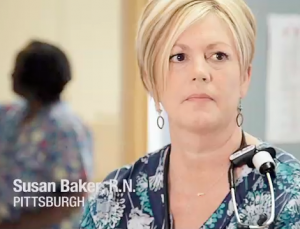 “I see it every day. Families without health insurance. They have jobs, but struggle to pay their bills. So they end up in emergency rooms, and it costs us all,” Baker says.

“But if Governor Corbett makes the right choice, he can change that. By expanding Medicaid, he can cover hundreds of thousands of families. It will save money, create jobs and get families the care they need.”

The ad asks viewers to call Corbett’s office to support the plan. It will appear in the Erie, Pittsburgh and Scranton/Wilkes-Barre broadcast markets over the next several days to correlate with National Nurses Week.

Her claims are based on a report from the RAND Corporation, a nonprofit policy group. Their March 2013 study concluded that expansion would insure 340,000 people currently without coverage create 35,000 jobs in Pa.

Many of those jobs would be in the healthcare field. SEIU has the strongest presence in that sector of any Pa. union, representing 25,000 nurses and other staff.

Critics note that the cost to the state would be significant (Rand says $611M by 2020) and that the federal contribution would from 100% to 90% dip after 3 years. And don’t get them started on the federal government’s fiscal discipline and reliability.

Corbett has sent mixed signals on Medicaid. While expressing skepticism about the long term solvency of the federal enterprise, he has also met with Health and Human Services Secretary Kathleen Sebelius about the possibility of expansion. The primary goal of those conversations: to determine what, if any, custom benefits Pa. can win as a condition of acceptance.

Corbett spokeswoman Christine Cronkright reiterated the Governor’s openness to a deal and said in any case he has proposed reforms of the current system.

“Governor Corbett believes we need affordable, accessible and quality healthcare for all Pennsylvanians,” she said. “He has proposed several reforms of our Medicaid program that will make it more sustainable and is pursuing with Washington whether Pennsylvania can increase access to coverage through offering private insurance on the health insurance exchange.”