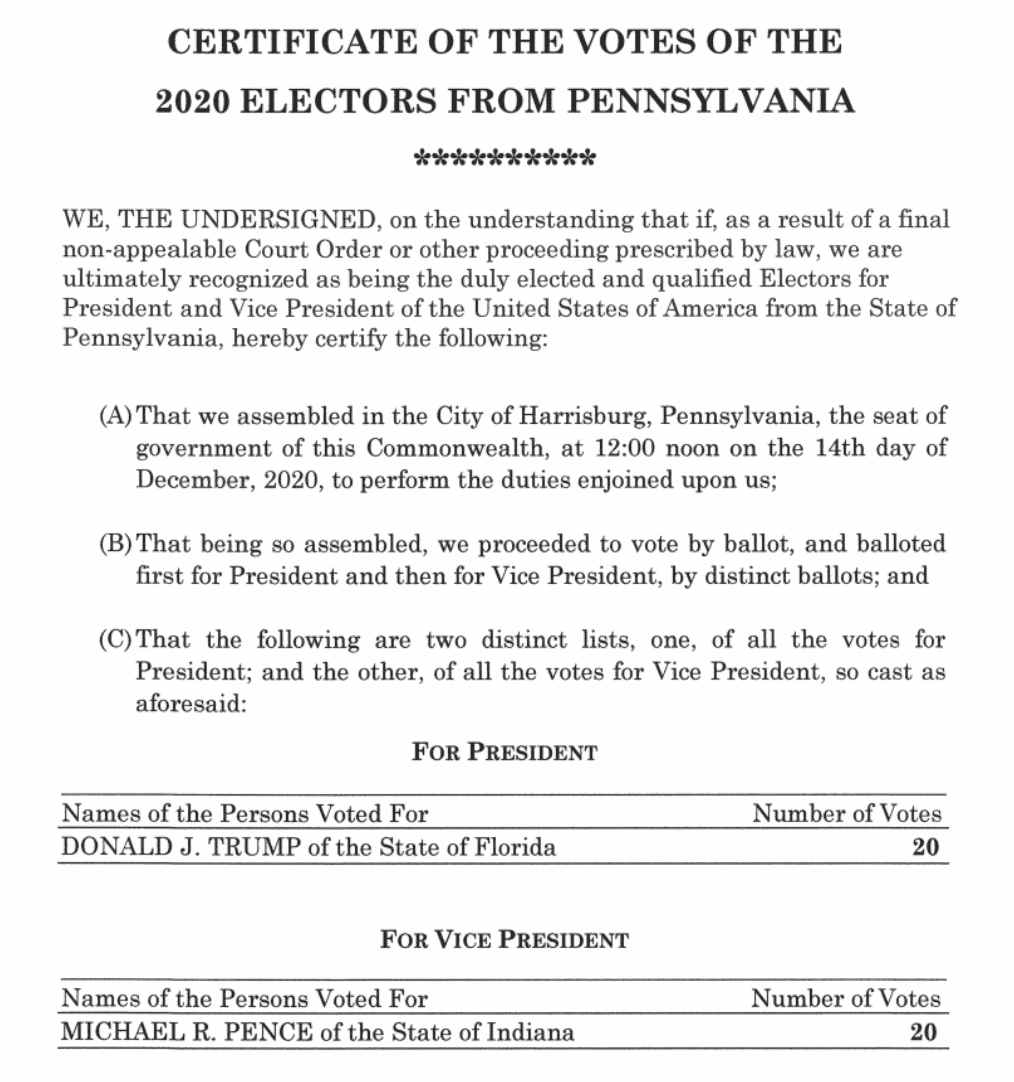 A subpoena sent to one of the “electors” – Bill Bachenberg – read:

“We’ll show evidence of the president’s involvement in the scheme. We’ll also again show evidence about what his own lawyers thought about this scheme,” Schiff said during an appearance on CNN‘s State of the Union Sunday morning.

Who was on the list of “alternate” electors from the Commonwealth? 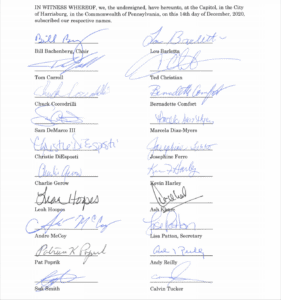 Kevin Harley (Lancaster County). Managing director of Quantum Communications and has served as a spokesman for Charlie Gerow

Andy Reilly (Delaware County). National committeeman for the Republican Party of Pennsylvania and former secretary for the party

Calvin Tucker (Philadelphia). Deputy Chairman of the Pennsylvania Republican Party. In 2016, he served as a media surrogate and African American advisor to Trump’s campaign

Robert Asher (replaced by Carroll): Asher has held several positions in the Pennsylvania Republican Party and has held various local elected offices. While chairman of the Republican State Committee of Pennsylvania, he was convicted in 1987 of conspiracy and bribery, among other charges, for accepting bribes in exchange for awarding a state contract. He resigned from the position and served one year in federal prison.

Lawrence Tabas (replaced by Hoopes): Tabas is chairman of the Republican Party of Pennsylvania, longtime general counsel to the party and a well-known Philadelphia elections attorney. Before the 2020 election, Tabas told the Atlantic that he had spoken with the Trump reelection campaign about the possibility that Republican-controlled legislatures could directly appoint electors, but he claimed the comments were taken out of context.

Thomas Marino (replaced by Gerow): Marino was a member of the U.S. House from 2011 until 2019, when he abruptly resigned two weeks into his term. He has also served as U.S. Attorney for the Middle District of Pennsylvania. In 2017, Trump nominated him to be the director of the Office of National Drug Control Policy, but he withdrew from consideration after reports that he had crafted a bill that protected pharmaceutical manufacturers and distributors and made it harder for the federal government to tackle the opioid crisis.

Lance Stange (replaced by Harley): Stange works for Novak Strategic Advisors and has served as chairman of the northeast caucus of the Republican Party of Pennsylvania.

Carolyn Welsh (replaced by Smith): Welsh was the sheriff of Chester County for two decades until 2019 and was one of Trump’s earliest boosters in Pennsylvania, often speaking at his rallies. In March, she entered a no-contest plea to misdemeanor theft charges for allegedly allowing employees to improperly collect comp time, paid for by tax dollars, for volunteering at fundraisers for the office’s K-9 unit. A judge ordered her to pay restitution and a fine.

Christine Toretti (replaced by McCoy): Toretti is the national committeewoman for the Pennsylvania Republican Party and is the former chairman and CEO of S. W. Jack Drilling Co., an oil and gas company involved in fracking.

Robert Gleason (replaced by DiEsposti): Gleason was formerly the chair of the Pennsylvania Republican Party. He is a businessman who was appointed by Trump in 2018 to the board of visitors of the U.S. Air Force Academy.