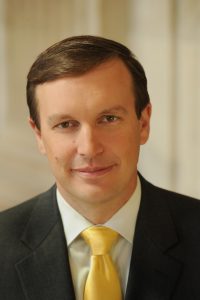 A meal with Murphy.

The Pennsylvania Democratic Party announced that Sen. Chris Murphy (D-CT) will be the keynote speaker for their upcoming Fall Dinner on Sept. 20 in Harrisburg. Murphy was first elected to the Senate in 2012 and was most recently reelected in 2018 by a 20 point margin in the Democrat friendly state.

“We are thrilled and honored to have Senator Chris Murphy as our guest speaker for our Keystone Dinner,” Pennsylvania Democratic Party Executive Director Sinceré Harris said in a statement. “Senator Murphy has earned a reputation as a serious legislator and tireless advocate for every day Americans. He has stood up for his principles by taking on big special interests and become a leading voice fighting to create jobs, ensure all Americans have quality health care they can afford, and keep our kids safe from gun violence. Pennsylvania Democrats are proud to welcome Senator Murphy to the Keystone state.”

The Pennsylvania Republican Party said they hope the event will be used to “finally” provide a message of unity, rather than pitting people against one another.

“We wish them a pleasant evening together, and we hope they use it to finally develop a message that inspires every day people to be for something rather than against each other,” Pennsylvania Republican Party Senior Advisor Vonne Andring said in a statement. “We hope they will seek to give Pennsylvanians hope that their leaders can work together for individual freedom and opportunity for all. That’s what we’ll be doing.”

The Pennsylvania Republican Party is also holding their Fall Dinner on Friday, September 20 with HUD Secretary Ben Carson headlining the event at the Hershey Lodge.

The PA Dems dinner at the Sheraton Harrisburg Hershey Hotel in the Commonwealth Ballroom will begin at 7 PM. A dinner ticket cost $40 per person.