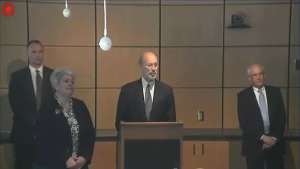 In the blame game between the Senate Republicans and Governor Tom Wolf over who caused 600 state workers to be furloughed, Republicans say they have a smoking gun that proves Wolf is playing politics.

State Senator Guy Reschenthaler (R-Allegheny) released a 30 second video clip from a conference call Wolf held on November 21 with the affected employees of the unemployment call centers. Senator and gubernatorial hopeful Scott Wagner obtained the video through a Right-to-Know request.

“This is the consequence of elections. This is what happens when we don’t get the people we want. It’s not a matter of shaking things up. It’s not just shaking things up. It’s people losing their jobs and this is absolutely, positively wrong,” Wolf says in the 30 second clip. He goes on to describe constituents who rely on the call center services.

The clip ends with Wolf saying: “Elections have consequences.”

The comment echoes then-President Obama’s infamous words following a 2009 meeting with Rep. Eric Cantor (R-Virginia). Republicans used Obama’s quote to characterize him as uncooperative and unwilling to work with Congress. The Senate GOP is trying to paint Wolf with a similar brush, especially with the upcoming budget season and 2018 election.

“The Governor is showing a severe lack of leadership by placing the blame on election results rather than his and previous administrations’ gross mismanagement of the entire Unemployment Compensation system,” Reschenthaler said.

“A statement like the one made in this video simply confirms what we’ve believed all along – this is purely a political game on the Governor’s part.”

Wolf’s office said the Governor was being candid and that Republicans are the ones playing political games.

“The governor was simply providing this context to the employees that were wondering why Senate Republicans had completely changed course,” said Wolf spokesman J.J. Abbott.

“Following the November election, the Senate Republicans did a 180 degree turn on their support for continuing to fund the unemployment system. The timing of this, highlighted by the refusal in November to even hold a vote to keep the centers open, does not seem like a coincidence.”

PoliticsPA obtained a copy of the full video, which includes 35 minutes of Wolf speaking. The 30 second clip comes from Wolf’s introductory remarks (at the 33:13 mark).

The clip picks up just after Wolf described having an agreement with Senate Leadership. Specifically Wolf said Senate Majority Leader Jake Corman had agreed to pass a bill funding the centers – but reneged.

In the video, Wolf alludes to several aspects of the 2016 election outcomes that he thinks contributed to the impasse.

At points in the video Wolf alludes to President Trump’s campaign rhetoric saying, “I think we had a little bit of that this election, didn’t we? Just saying ‘we want to bring jobs back’ and all that kind of stuff. Well we need real answers, you need real answers.”

The Senate contends that Wolf’s office did not have agreed-upon reforms in place to continue lowering the costs of running the unemployment centers. After the vote was put off, Corman’s office suggested Wolf could fund the program by reallocating funds from elsewhere in the budget, if he so chose. Republicans later accused the Governor of closing centers in Republican legislative districts. Currently, they are awaiting a report from the Pa. Auditor General (due in April) before taking the issue back up.

The ongoing fight has quickly become one of the major storylines between Wolf and the Republicans in the legislature. Senator Wagner (R-York) has been the most vocal of all. He announced his candidacy for Governor in January after openly considering a bid for over a year.

In December Wagner filed a Right-to-Know Law request for any records pertaining to the closings, which ended up producing this video.

It’s clear in the question and answer session that Wolf blames Wagner for the deal falling through.

“There is a reality that we are all dealing with here. That is that that person can hang up on you when you call certain Senators’ offices. He got elected and he’s not going to be up for reelection for two years, well he is going to be running against me in two years.”

“There is only one person responsible for forcing the closure of unemployment centers, and hundreds of people losing their jobs: Harrisburg insider Scott Wagner,” said party spokesperson Preston Maddock. “He boasted about digging his feet into stop the funding needed to keep these centers open, and his actions hurt working families across Pennsylvania making it harder for people to access benefits, find employment, and put food on the table.”

“Governor Wolf’s administration continues to try to blame others for their failure to put forward a plan to fix this system. Senator Wagner stood up for taxpayers by refusing to continue to fund a program that was supposed to be temporary without knowing what the exit strategy was. Unless the Constitution has changed recently, executive branch employees can only be laid off by the executive – a fact that this administration hopes the public doesn’t understand,” blasted Wagner’s Chief of Staff Jason High.

Neither the Pa. Dems nor Sen. Wagner commented directly on the video’s content or origins.