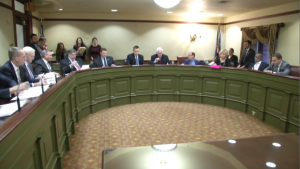 Senate Republicans in the Judiciary Committee voted 10-5 on Senate Bill 3, a bill banning abortions after 20 weeks.  The vote comes the day before Governor Tom Wolf will be his budget address, and just 3 days after the bill was introduced.

“As in current law, this limitation would not apply in situations where an abortion is necessary to prevent the death or impairment of a major bodily function of a woman,” Brooks wrote in her co-sponsorship memorandum.

“In addition, this legislation would prohibit the practice of tearing a fetus apart by its limbs, also called dismemberment abortion,” the memo continues.

The Judiciary Committee held session on Monday afternoon and voted to advance the bill 10-5 along party lines. The quick movement from referral on Feb. 2 to today’s hearing gave little time for public comment on the bill to members of the Committee.

Governor Wolf said unequivocally that he will veto the bill if it gets to his desk.

“The Senate seems bent on pushing through the most radical and unconstitutional bill to prohibit a woman from exercising her own right to make decisions regarding her own health,” Wolf said in a video released after the Senate hearing.

“It’s wrong, it’s unconstitutional, it flies in the face of everything I stand for, and I will veto it,” Wolf continued.

“There’s a reason politicians want to fast-track this bill with little public notice, and then sneak it through the process during budget week, when they hope everyone is too distracted to notice,” said Sari Stevens, Executive Director of Planned Parenthood Pennsylvania Advocates.

The Senate had the opportunity last year to pass a mostly identical bill that had already made it through the House but did not bring it to the floor. This year the Senate GOP has a veto-proof majority, provided every Republican supports the bill.

The House passed the same bill in the previous session with 132 votes, just two shy of a veto-proof majority. 25 House Democrats voted for the bill (House Bill 1948) while nine Republicans voted against it.

To overcome a veto this time, House GOP leaders would need to bring home dissenting Republican votes – or convince enough Democrats to break from a Governor they will share a ticket with in 2018.

Wolf’s campaign also made the vote today an important part of his messaging over the last few weeks, sending out multiple emails and social media updates to supporters.

“Instead of listening to women, doctors, and the Supreme Court, they are rushing to vote on SB3, the most extreme anti-choice bill in the country,” Wolf said in one of these emails.

The Pennsylvania Democratic Party has taken the vote as an opportunity to hit State Senator and gubernatorial hopeful Scott Wagner (R-York) for his sponsorship of the bill.

“Harrisburg insider Scott Wagner is a prime sponsor of the strictest anti-choice legislation in the country that criminalizes abortion and drastically restricts a woman’s right to make her own health care decisions,” said Pennsylvania Democratic Party Executive Director Sinceré Harris.

PoliticsPA has reached out to Majority Leader Jake Corman and Wagner for comment on this story.

Similar efforts have been taken up across the country, states like Ohio, Kentucky, and Florida.  Some have been enjoined by the courts, like in Texas.

It remains to be seen just how intent Republican leaders are to push the issue. In recent years, abortion-related bills have come up for votes in committee or by one chamber, but stopped before final passage. In some cases the bills died in the face of strong public opposition. Other times, it seemed moderate GOP leaders were more interested in placating conservative colleagues.  But with historic majorities in both chambers, and much more conservative leadership, the usual practice might stop being usual.