The tense negotiations caused the Senate and House to delay their recesses and work long into the night last weekend.   Only when the legislation was signed by President Obama could the country’s elected officials finally leave for vacation.

Their eagerness to do so was especially apparent at Robert Ford’s confirmation hearing before the Senate Foreign Relations Committee, which must determine whether to reconfirm him to his post as Ambassador to Syria. 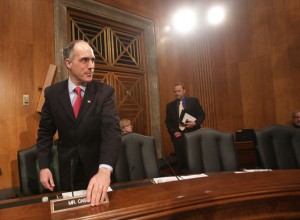 Only one of the committee’s eighteen members attended: U.S. Senator Bob Casey Jr.

Eight of the committee’s other members provided Fox News with excuses for their absence, which ranged from “scheduling conflicts” to “conference calls.”

Casey ‘s spokeswoman said the senator attended the hearing because he felt it was an important issue. “The senator hopes the rest of his colleagues find the time to review the testimony,” she said, adding that Casey’s office is not “in a position to judge others on attendance.”

During the hearing, Ford spoke about the brutal crackdown Syria’s dictator Bashar al-Assad has used to quell the protesters’ push for democracy. He insisted that the Syrian government is using “widespread arrest campaigns,” “atrocious torture” and government-sanctioned “slaughter”  — roughly 2,000 protesters have died thusfar, he said — to remain in power.

He also expressed skepticism the Assad regime would legitimately push for democracy. Assad is “unwilling or unable” to lead the democratic transition people are demanding, Ford insisted.

On Thursday, Assad issued a statement which opened the door for possible reforms by calling for a “multi-party political system.”

The proposed reforms came the day after the United Nations Secretary General Ban Ki-moon condemned the attacks. “Once again, I call on President Assad and the Syrian authorities to immediately cease all violence against their people, to fully respect human rights and implement reforms that they have already announced,” he said.