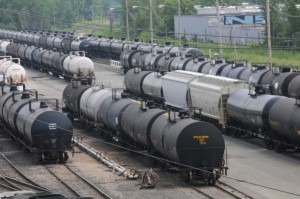 As train derailments appear to be on the rise, Senator Casey is throwing his support behind the Transportation, Housing, and Urban Development (THUD) Appropriations bill. Three accidents in Philadelphia, Vandergrift, and McKeesport occurred during January, February, and June of this year, respectively.

Over 400,000 carloads of crude oil were shipped last year, and that number will only burgeon as crude oil extraction increases. Last year the state witnessed more spills due to rail accidents than it did the last four decades.

THUD will fund 20 new rail and hazardous materials inspectors, retain the 45 rail safety positions created in 2010, and provide $3 million to expand the use of automated track inspections, thus ensuring proper maintenance of rails.

In a conference call with reporters today, Senator Casey commented that, “it is hard to believe we even have to legislate on hiring, but in an era when there are those who want to slash and cut everything, steps have to be taken.”

Casey continued by affirming the necessity of safe and dependable rail transportation to sustain and grow the economy.

“We’ve seen this problem not only in Pennsylvania, but across the country, there is a lack of investment in infrastructure…part of the challenge is making sure our infrastructure is up to speed,” Casey stated.

According to Casey, “votes on appropriation bills should be a lot more routine than they have been over the last few years.” He affirmed that, “when there is a bill that can bring a measure of consistency and safety, I want to make sure that we push it through and get it done.”