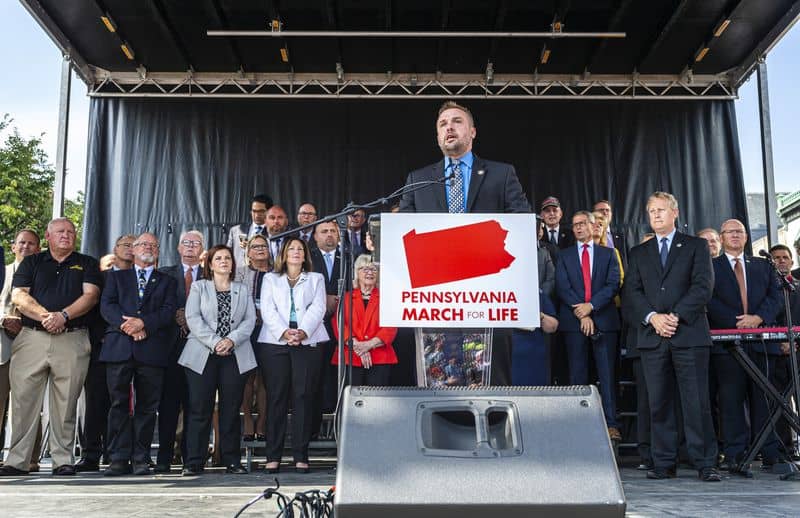 Reader Poll: Mail Ballots. Have you requested a mail ballot for November 8? (PoliticsPA)

An estimated 5,000 anti-abortion advocates traveled to the state capital on Monday to celebrate the overturning of Roe v. Wade and call for even stricter abortion laws throughout the Commonwealth.

“What a difference a year makes,” said House Speaker Bryan Cutler (R-Lancaster). “Am I right? Thanks to your advocacy and your prayers, we continue to be successful.”

Attendees at the march joined in prayer for Democratic Gov. Tom Wolf to ask him to change his mind on abortion policy.” (Pennsylvania Capital-Star)

At March For Life, Anti-Abortion Advocates Call For Stricter PA Laws, Even a Ban. “In the first post-Roe v. Wade March for Life rally in the country, thousands of anti-abortion advocates spilled across the steps of the state Capitol on Monday to celebrate the overturning of federal abortion rights in the country and to call for stricter laws and even a ban on abortion at the state level.” (PennLive)

“On Nov. 8, residents of the Keystone State will choose between Democrat Josh Shapiro and Republican Doug Mastriano to be their next governor. The two are running to replace Democrat Tom Wolf, who has held the position since 2015.

Josh Shapiro has served as Attorney General of the Commonwealth since 2017. He served on the Montgomery County Board of Commissioners from 2011-2017, and prior to that he was a member of the Pennsylvania House of Representatives from 2005-2011.

Doug Mastriano is a Pennsylvania State Senator, where he has represented the 33rd district in southern Pennsylvania since 2019. His district is mostly rural, and includes Gettysburg and Chambersburg.” (Carnegie Mellon Tartan)

In A Letter Released by the Shapiro Campaign, 60 Veterans Blast Doug Mastriano’s Confederate Uniform Photo as “Shameful.” “The signatories included prominent Democrats who served in the Armed Forces, including former Under Secretary of the Army Patrick Murphy.” (Philadelphia Inquirer)

Josh Shapiro Rallies in Pittsburgh, Vows to Create More Labor Protections for PA Workers If Elected Governor. “Shapiro said he would veto any right-to-work legislation. He added that he would support workers’ efforts across the state to unionize.” (Tribune-Review)

In The Must-Win Philly Suburbs, With Santorum at His Side, Doug Mastriano Mines For Votes. “Santorum’s message to voters in Delaware County, until recently a Republican stronghold, was that even if you don’t like Mastriano’s position on those issues, he still has the qualities of a traditional conservative.” (Pennsylvania Capital-Star)

3. Philly DA Larry Krasner Is Now Providing Some Records to the State Committee Investigating Him

“Philadelphia District Attorney Larry Krasner said Monday that his office is partially complying with a subpoena issued by a legislative panel hunting for grounds to impeach him, though he continued to slam the process as “dirty politics in an election year.”

The development comes a week after the Pennsylvania House took the highly unusual step of voting to hold Krasner in contempt for refusing to comply with the subpoena, which requested his office’s policies on a variety of matters and its records on a criminal investigation into a former police officer. The vote was 162-38, with dozens of Democrats siding with the GOP.” (Philadelphia Inquirer)

Hernandez Named Kenney’s Chief of Staff Following Engler Resignation. “There will be a changing of the guard in the Philadelphia Mayor’s Office beginning October 1 as Christina Pastrana Hernandez, currently First Deputy Chief of Staff, will succeed James Engler as Chief of Staff.” (PoliticsPA)

PA House Preview: North by Northwest. “We begin our series on the candidates for the Pennsylvania State House with a look at the northwest corner of the Keystone State.” (PoliticsPA)

Young People Say They Feel Energized About 2022 PA Election, But Will They Vote? “In 2022, with the election riding on pivotal states like Pennsylvania, young voters are a crucial – but still stubborn – demographic.” (PennLive)