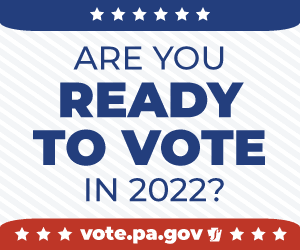 Have you requested a mail ballot for November 8? Take part in our reader poll. (PoliticsPA)

“All eyes will be on Pennsylvania this November election as a number of contentious races on the ballot will determine the state’s political future.

While (the Senate and Governor’s) races may be getting the most media attention, Pennsylvanians will also vote for their U.S. House representatives and lawmakers in the state legislature, where Democrats seek to chip away at the Republican majority in both the state House and Senate.

It’s vital to thoroughly research the candidates on your ballot, and we’re here to help. Here are a few steps you can take to prepare for Nov. 8” (Spotlight PA)

PA House Preview: South by Southwest. “We continue our series on the candidates for the Pennsylvania State House with a look at the southwest corner of the Keystone State.” (PoliticsPA)

Mail Ballot Fight Persists in Key States, Sure to Slow Count. “Election workers’ inability to do that work ahead of time means many of the mailed ballots may not get counted on Election Day, delaying results in tight races and leaving a gaping hole for misinformation and lies to flood the public space.” (AP)

“The Congressional Leadership Fund is out with a new ad against Susan Wild, the Democratic incumbent in Pennsylvania’s 7th Congressional District.

Entitled “Booming,” the spot is critical of Wild’s use of the term, “booming,” when describing the economy over recent months, calling her out of touch with families back home.

The CLF has reserved $7.2 million for the ad buy in PA-07, specifically, and includes broadcast/cable TV as well as digital and OTT.” (PoliticsPA)

Fact Check on CLF TV Commercial Against Cartwright. “This is the first of a series of analyses of television commercials aired in the 8th Congressional District race between U.S. Rep. Matt Cartwright, D-Moosic, and Republican Jim Bognet, a consultant who lives in Hazle Twp” (Times-Tribune)

These 10 Pennsylvania Donors Gave Over $35.3 Million. “These are the top 10 individual donors to Pennsylvania state-level candidates and political action committees (PACs) in the 2022 election cycle, according to campaign finance reports submitted to the Pennsylvania Department of State” (Ballotpedia)

3. Oz, Who Has Criticized Fetterman For Releasing Prisoners, Announces Support For Reducing Sentences

“In a bid to woo Black voters Monday, Republican U.S. Senate candidate Mehmet Oz expressed support for laws that would reduce the federal prison population — even as his campaign continues to criticize his Democratic opponent, John Fetterman, for supporting the release of more Pennsylvania prisoners.

Oz’s new stance contrasts with one of the key tactics of his campaign so far, which has been to relentlessly criticize Fetterman for supporting the early release of prisoners. Up until now Oz had singled out a handful of violent offenders that Fetterman wanted released.” (WESA)

Mehmet Oz Is Barely Advertising on Facebook, While John Fetterman’s Ads Are Seen Millions of Times. “Fetterman spent 38 times as much as Oz on Facebook and Instagram advertising from the primary through mid-September.” (Philadelphia Inquirer)

PA Lawmakers Push Bill With Language Broader Than Florida’s “Don’t Say Gay” Bill. “Conservatives say the policy is necessary to safeguard against obscene material in schools, but critics warn the implementation of such laws has targeted LGBTQ people.” (PennLive)

PA House Approves Two New Election Measures on Deceased Voters, Write-In Candidates. “According to the bill, the Department of State would be required to cross-reference its database of registered voters at least once monthly with death record information from local registrars – birth date, first and last names and last four digits of a Social Security number.” (Tribune-Democrat)

As Republicans Try to Make Larry Krasner Their Midterm Boogeyman, Some Democrats Are Keeping Their Distance. “It seemed extraordinary to see them line up against him — dozens of elected Democrats from every corner of Pennsylvania voting with Republicans to hold Larry Krasner, a prosecutor from their own party, in contempt of the state House.” (Philadelphia Inquirer)

PA a National Leader as ‘Unprecedented Flood’ of Books Bans Engulfs U.S. School Districts. “More than 1,600 book titles across 32 states were banned from public schools during the 2021-2022 school year, with the bulk of the ban requests coming from a handful of right-wing groups pushing for censorship of books that feature LGBTQ+ characters and characters of color, a new report issued Monday said.” (Pennsylvania Capital-Star)