September 7: Turning Up the Heat 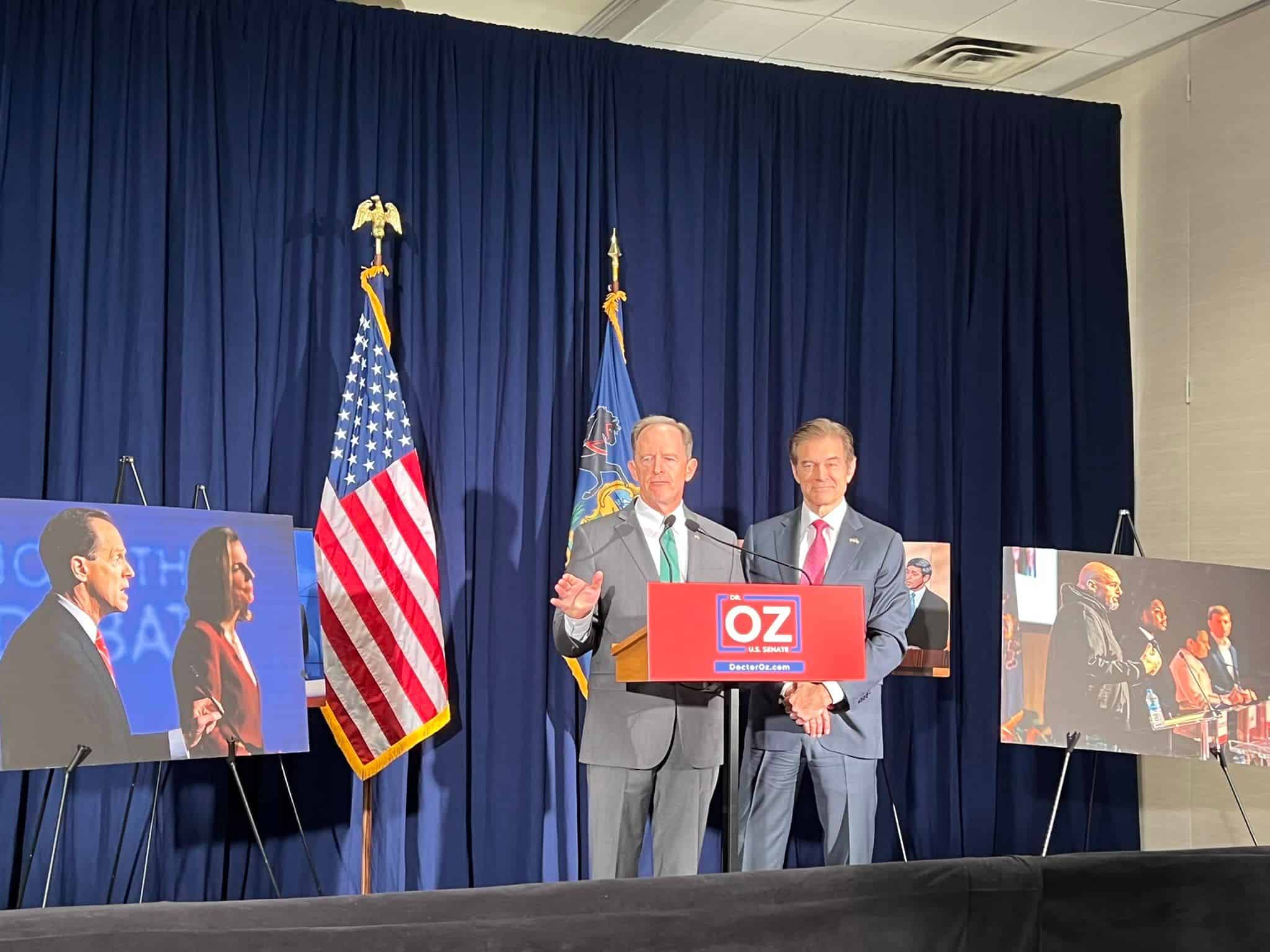 1. Toomey Says Fetterman ‘Not Up to the Job’ As Senator

“Flanked by pictures of past Pennsylvania Senate debates, Mehmet Oz and Sen. Pat Toomey on Tuesday pressed Democratic nominee John Fetterman to commit to a debate, while questioning Fetterman’s ability to serve as a senator due to his health.

Fetterman has said he has lingering communication issues stemming from a May 13 stroke that he said nearly killed him. He spent most of the summer recovering and returned to the campaign trail four weeks ago.

Toomey, the retiring Republican senator, said that, based on what he’s seen of Fetterman’s recent public appearances, the Democrat’s communication struggles mean he could not be an effective senator.” (Philadelphia Inquirer)

Sen. Pat Toomey Says If John Fetterman Is Too Sick to Debate, Then He’s Too Sick to be In The U.S. Senate. “That level of intense engagement and debate and discussion is absolutely fundamental to this job. If he’s not able to do that, then frankly, he’s not going to be able to be an effective senator, and Pennsylvania voters ought to know that,” Toomey told KDKA’s Jon Delano on Tuesday.” (KDKA)

Oz Backers Launch Ads Attacking Fetterman For Pulling Gun on Black Jogger in 2013. “During Pennsylvania’s Senate primary, Black Democrats worried that the GOP would target voters with ads about the time Democrat John Fetterman pulled a gun on a Black jogger he wrongly suspected of a crime. Now it’s on the air.” (NBC News)

Senate Republicans Point Fingers as Majority Hopes Slip. “Republicans are playing the blame game as they watch their chances of winning back control of the Senate shrink two months before Election Day.” (The Hill)

Want to Know Why Washington Is Broken? Look at the Senate Race in Pennsylvania. “It’s no secret that Americans don’t much like what’s happening in Washington right now. A full 41% of voters don’t think their representative deserves another term, Gallup found in July.” (TIME)

“FiveThirtyEight.com has compiled a list of those candidates who support former President Donald Trump’s false claims that the 2020 election was stolen.

What did it find? There are a lot of election deniers on the ballot.” (PoliticsPA)

Doug Mastriano’s Political Success Happened With a Little Luck, and a Big Pandemic. “Doug Mastriano, Pennsylvania’s Republican nominee for governor, is Exhibit A for how fate and timing can rocket-launch a political career.” (PennLive)

Outcome of Race for Governor Will Shape Education Policies in PA. “Another issue, and one not exactly lost in the chaos of the election cycle, is the immediate future of public education in Pennsylvania. School choice, student outcomes, local control, content and curriculum and, of course, taxpayer funding are all among the concerns.” (Tribune-Democrat)

“On Tuesday, Democratic state lawmakers heard from a panel of reproductive health activists and experts about the deceptive and misleading practices crisis pregnancy centers use to persuade pregnant individuals to carry a pregnancy to term.

State Sen. Judy Schwank (D-Berks), called the centers “a serious issue” in post-Roe Pennsylvania, adding that with very little state oversight, anti-abortion centers deprive women of the ability to make an informed decision about whether to keep or terminate a pregnancy.” (Pennsylvania Capital-Star)

PA Democrat Uses Tried and True Playbook in Tough Race. “In a year when dozens of Democrats are facing potential losses in November, Cartwright is a model for how to win. His district not only supported Trump in 2016 and 2020, but Cartwright won it in 2016, 2018 and 2020 — the only Democratic lawmaker running this year who can make that claim. While other candidates in purple districts look to Cartwright as an example, he isn’t taking his past success for granted this year.” (Bloomberg)

Councilman Derek Green Resigns, Enters Race For Philly Mayor. “Councilmember Derek Green has become the second member of council to announce his resignation and a run for mayor of Philadelphia.” (WHYY)

Pitt Spent $750K On Lobbying For State Budget Fight – Nine Times Their Usual Amount. “The University of Pittsburgh faced a tough battle this year in Harrisburg for its annual appropriation, and lobbying disclosure reports now show just how tough it was. The school spent more than nine times its usual amount to finally get the state funds it normally receives, according to reports filed with the Department of State.” (WESA)

Candidates Vying to Replace State Sen. Patrick Browne Agree to Debate As Election Season Heats Up. “As election season moves into high gear, the two candidates seeking to replace longtime Lehigh County Sen. Pat Browne are expected to debate at least once and appear in the same venue on at least one other occasion.” (Morning Call)

Lycoming County Ballot to Include Question of Keeping Electronic System. “Voters in Lycoming County will have the opportunity in November to decide whether to keep using an electronic system to tabulate votes.” (PennLive)

State House Boundaries Shift With The 2022 Election. “Unless they participated in this year’s May primary, voters in many areas of Crawford County will find in the upcoming November election that they’ll be casting ballots for a different state House of Representatives district than they did in the 2020 election.” (Meadville Tribune)