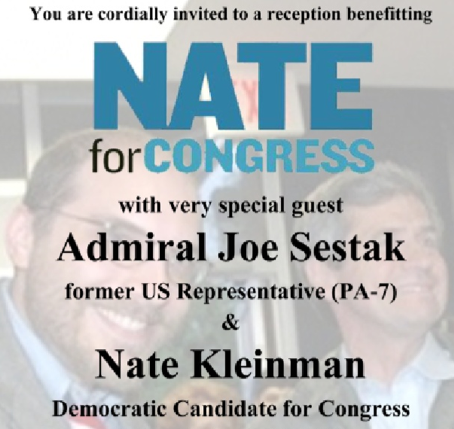 “I could not be more excited to announce the following event. This is a game-changer,” Kleimman said in an email to supporters. “Please feel free to forward widely!”

Kleinman worked and volunteered for Sestak’s congressional and Senate campaigns.

The event flier is below.

Sestak has the reputation of a maverick, earned when he challenged Democratic party leadership in his successful bid against Sen. Arlen Specter (Schwartz endorsed Specter in the 2010 primary).

Schwartz and Sestak served together in Congress from 2007 to 2011. Schwartz directs recruiting for the Democratic Congressional Campaign Committee, a role she has had for several years in the Philadelphia area.

“It’s a kind gesture that Joe Sestak wants to support a former staffer, but for Democrats in Pennsylvania who care about taking back Congress and ensuring that women have a seat at the political table, we think they will be pretty taken aback to learn that Joe Sestak is supporting a candidate running a write in campaign against the only female member of the Pennsylvania Congressional Delegation and one of the Democrats pivotal to ensuring that House Democrats take back the Majority,” said Schwartz Political Director Neil Deegan.

According to multiple Democratic sources, Sestak also has a practice of helping any Democratic candidate who asks, contested primary or not. PoliticsPA is seeking to confirm the event with Sestak, but in the past – a 2011 race for Cumberland County Commissioner – a similar appearance did not constitute an official endorsement.

Kleinman’s name was knocked off the ballot last week after a petition challenge, and he launched a write-in campaign against Schwartz immediately after.

He faces a steep uphill climb; in addition to being on the ballot, Schwartz boasts $2.3 million cash on hand.