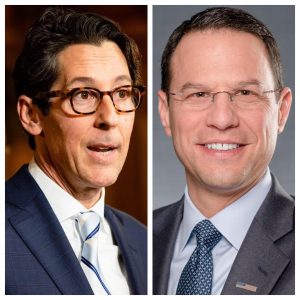 Uniting behind the Scranton native.

The release from the Biden campaign says these endorsements “represent a diversity of support” across Pennsylvania and added that it represents a “broad coalition needed to defeat Donald Trump.”

“I’ve known and worked with Vice President Biden for two decades,” Shapiro said in the release. “He is a strong leader—and right now, we need his moral clarity, his grit and his experience more than ever. It’s time to restore decency and honor to the presidency and to our nation. That’s why I’m so proud to stand with this large group of local and state leaders from across Pennsylvania to support Joe Biden.”

Shapiro added in his statement that the nation is facing many serious challengers, citing the opioid epidemic, gun violence, and a “system rigged against the voiceless,” and described Biden as the candidate most capable of addressing these issues.

Torsella said that he’s seen families “struggle” as a result of Trump’s policies and believes that Biden can unite the nation and win the general election in November.

“The American presidency is about leadership and character, especially in times of crisis,” Torsella said. “I’m proud to endorse Joe Biden, because he has both.”

“As State Treasurer, I see every day how families are struggling under the failures of the Trump Administration, on everything from student debt to opioids to our health care,” Torsella continued. “We can trust Joe Biden to fight for their futures, not his own. As a fellow son of Northeastern Pennsylvania, I know he has the toughness to beat Donald Trump in November, the values to bring our country together and back on the right track, and the character to be a leader we can look up to.”

While Biden has emerged as the clear frontrunner for the nomination, polling conducted shortly before the first Super Tuesday showed Biden and Sanders in a competitive primary race in the state, although there were several other Democrats still seeking the party nod and the race was viewed more as a toss-up. General election polling also shows a tight race between President Donald Trump and the two Democratic frontrunners.

A Quinnipiac University poll released twenty five days ago showed all of the Democratic presidential frontrunners leading Trump in the state with Biden holding the largest lead of 8 points and Sen. Bernie Sanders leading Trump by 4 points. However, a Morning Call/Muhlenberg College poll released eighteen days ago showed Sanders with the best odds as the only Democrat defeating Trump head to head in the state by 3 points, while Biden was tied with Trump, although both results were within the margin of error.

As for the Democratic primary, a poll from Franklin and Marshall College released in late January showed Biden leading the Democratic pack with 22%, while Sanders was in second place with 15%, followed by Sen. Elizabeth Warren with 14%, and former New York City Mayor Michael Bloomberg in fourth place with 7%. However, the Election Research Center at the University of Wisconsin-Madison released a poll three weeks ago that showed Sanders leading the way in the Pennsylvania Democratic primary with 25%, followed by Biden in second place with 20%, and Bloomberg in third place with 19%.

The full list of the endorsements from Monday’s rollout can be seen below.