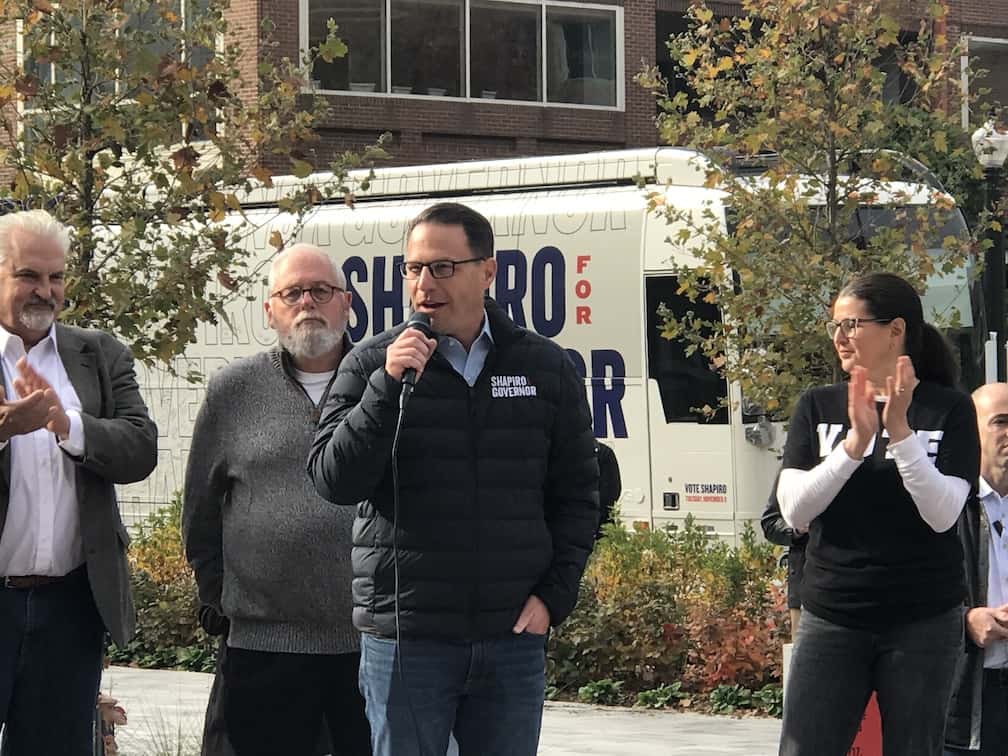 The “Big Fights Bus Tour” rolled into Lancaster on Friday with Josh Shapiro and Austin Davis making their case to be elected Governor and Lieutenant Governor, respectively, for the Commonwealth of Pennsylvania.

“I’ve been here, I’ve listened, I’ve heard your concerns,” he continued. “I’ve been humbled by what you’ve shared with me. I appreciate the hope you’ve placed in me. I’m running for governor not just to win an election, but to try to meet this moment.”

The bus tour is designed to get out the vote as the Democratic candidates are traveling around Pennsylvania to share their governing plans.

In front of a crowd of about 250, the duo was introduced by a host of speakers, including 11th Congressional District candidate Bob Hollister and Lancaster Mayor Dorene Sorace.

“There is a lot more at stake than just the current financial pressure we are all feeling,” said Hollister. “Inflation will work itself out in the coming months and year ahead but beyond that, there’s bigger issues. This is one of those occasions where (voters) need to look beyond their pocketbook.”

“I’m look for a governor who is going to be a partner with me and making sure that we can fund critical services,” said Sorace. “Like many other cities, we are functioning under an archaic tax structure from 1965 and we need change.”

Shapiro agreed, stating that cities like Lancaster can expect to see “real investment, real opportunity,” out of his administration. “We need to focus on investing in main streets like this.”

Davis said that he “wants to be a champion for working class families here. Pennsylvanians deserve leaders in Harrisburg that are going to have their backs.” He added that cities like Lancaster will have a seat at the table under the Shapiro/Davis administration.

Shapiro, while not talking about his faith, shared that “My scripture teaches me that no one is required to complete the task, but neither are we free to refrain from it. Each of us has a responsibility to get off the sideline, get in the game and do our part.

“I want to be a governor that lifts everybody up. and gives everybody an opportunity and moves our commonwealth forward.”

He was asked about his double-digit lead over Republican challenger Doug Mastriano in recent polls.

“I feel good but take nothing for granted. We’re running like we’re 50 points behind. There’s a gathering storm of folks who want to take off red jersey or blue jersey and put on a Pennsylvania jersey.”

Shapiro also commented on whether Mastriano would accept the results of the election.

“This is a guy who was part of the violent mob on January 6 that tried to stop the votes from being counted,” he said. “He’s already told us what he wants to do in 2024 by decertifying voting machines. It’s clear he is setting up to not accept the results on Tuesday. Austin and I have faith in the will of the people.

Mastriano will be rallying with former President Donald Trump in Latrobe on Saturday.