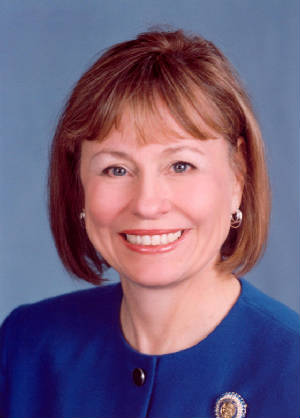 Sharron Angle, the Tea Party favorite who won the 2010 Republican nomination for U.S. Senate in Nevada but lost in the general to Harry Reid, has thrown her support behind Pa. Senate hopeful David Christian.

In a letter to conservative activists in Pennsylvania, Angle lauds Christian’s work as a businessman and a veterans’ advocate.

“He was instrumental in creating job training programs for returning Vietnam veterans and helped make Pennsylvania the only state compliant with federal employment law for returning veterans,” Angle wrote. “As a result, tens of thousands of our veterans have found meaningful jobs.”

Additionally Angle, who has a less than stellar relationship with the Nevada Republican Party, criticized the PAGOP and Governor Tom Corbett for their endorsement of Chester County entrepreneur Steve Welch.

“Frankly, the actions of Gov. Corbett and the PA GOP State Committee are indecent and immoral and a major reason why Obama could win,” she wrote.

It’s not the first obscure endorsement of the campaign. Alaska Senate hopeful Joe Miller, who defeated Sen. Lisa Murkowski in the GOP primary but lost to her write-in campaign in the general, endorsed Marc Scaringi for Senate last year.

Her entire letter is below. Note: several elements of her letter are not accurate – specifically the timing of Welch’s party switch and the exaggerated degree of his support for Obama.

From the Desk of Sharron Angle:

Pennsylvania is called “the Keystone State” for a very good reason. In 2012 it will play a key role in beating Barack Obama, his agenda and taking back the U.S Senate and the White House. In the last 50 years, no Democrat has won the Presidency without winning Pennsylvania.

We need a strong leader for U.S. Senate in Pennsylvania to galvanize voters for victory, because Obama is weak there. If the Republicans cannot recapture the White House, they need only 5 winning U.S. Senate candidates to take control of the Senate away from Harry Reid and the Democrats. That is why I’m supporting David Christian as one of the five candidates we will need to elect to stop Obama.

My support for David Christian was not given lightly, just look at his credentials. David is the only candidate with the gravitas to lead the state to victory. David is one of the most highly decorated US Army Veterans to come out of the Vietnam War: 7 Purple Hearts, the Distinguished Service Cross, two Silver Stars, a Bronze Star, nominated for the Medal of Honor twice and was the youngest commissioned officer since the Civil War. There is no doubt of David Christian’s courage to do what needs to be done in Washington.

Compare that to what the PA GOP State Committee and PA Governor Tom Corbett have recently done. The Republican leadership of Pennsylvania cut a deal to support a former Republican, turned Democrat, turned Republican again, named Steve Welch because they believed he could self-finance his campaign. In 2008 Welch was an outspoken supporter of Barack Obama and changed his party registration to Democrat to he could vote for Obama in the Democratic Primary. Then Welch changed his registration back so he could seek the Republican nomination to run for the U.S. Senate in 2012. Yet, he donated to liberal Democratic Congressmen Joe Sestak and was a significant financial supporter of Governor Corbett as well.

Frankly, the actions of Gov. Corbett and the PA GOP State Committee are indecent and immoral and a major reason why Obama could win. They all must be stopped and David Christian is the only person who has the moral fiber and tenacity to put an end to this nonsense.

David knows Washington D.C. He has advised U.S. Senators and 6 different Presidential Administrations. His closest relationship was with President Ronald Reagan. However, David is definitely not a Washington insider.

He was called to Washington to get results, and he did. He was instrumental in creating job training programs for returning Vietnam veterans and helped make Pennsylvania the only state compliant with federal employment law for returning veterans. As a result, tens of thousands of our veterans have found meaningful jobs.

Ronald Reagan recruited David to run for Congress in 1984, therefore, he is one of the few who can truly claim the mantel of being a “Ronald Reagan Republican.”

David’s private sector experience is equally as impressive. He currently, owns a consulting company that helps American companies sell their services and products to emerging nations around the world.

During the 1990s David was again called to Washington to solve problems in an insecure world. Relying on his international contacts, the government sent him to Cambodia, Bosnia, Russia, Lithuania, Chechnya and other dangerous places that were critical to the security of the United States. David was tasked to gather information and debrief U.S. officials. He is one person who does not need on the job training in Foreign Affairs, because he’s been there and has lived it.

On the campaign trail, David is an outspoken advocate for reforming the tax code; replacing the current system with a low across-the-board flat tax and abolishing the EPA, the Department of Education and the Department of Energy among others.

He is committed to lowering the corporate tax rate to bring foreign investment into our country and wants to review and streamline regulations on businesses to create a pro-growth commercial environment. For these reasons and more, I am supporting David Christian and I strongly encourage you to support David Christian as well.

Won’t you please help his campaign in Pennsylvania any way you can? Sign up to help, donate $20.12 to his campaign, make calls, do whatever you can, but please help get this patriot elected.

David’s election will be a key defining moment in defeating the Obama agenda and reining Obama in and ending the current national nightmare we see every day in Washington D.C.

Please stand with me and get behind the only true Reagan Republican running for the U.S. Senate in Pennsylvania, David A. Christian. Once again, his web site address is www.davechristian.com.

If you help David, you help yourself and you will be helping America in a very significant and historic way.