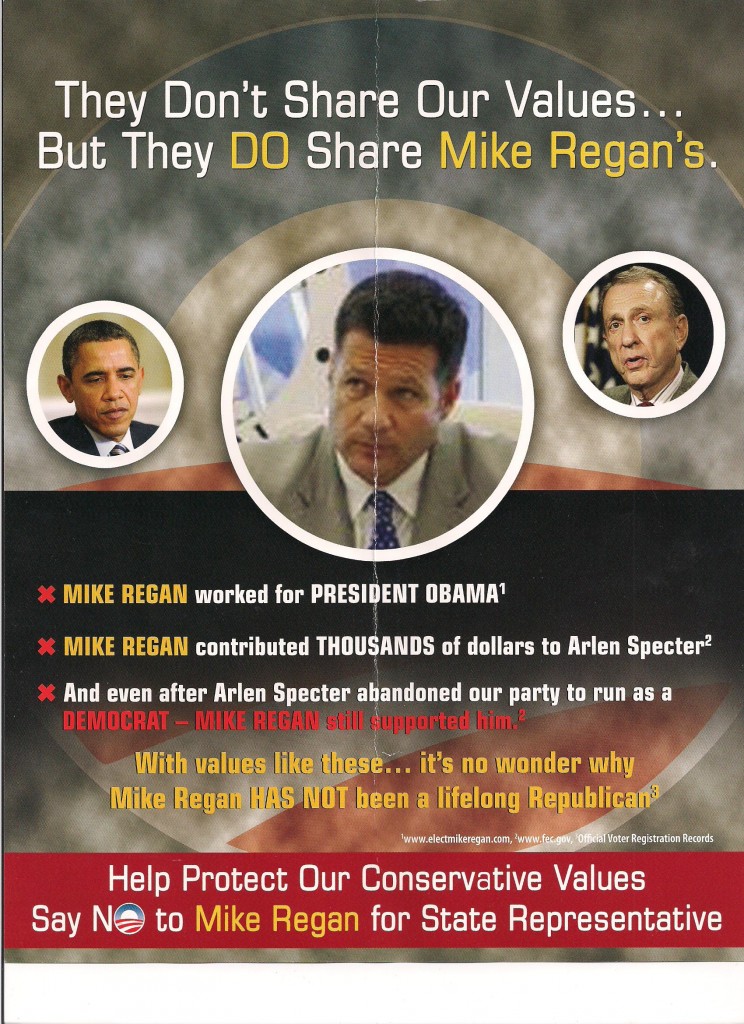 Rarely does a primary for an open state House seat attract as much attention as HD-92. The five-man Republican primary includes the nephew of Sen. Jake Corman, the son of Harrisburg GOP power-broker Rocco Pugliese, a former U.S. Marshall and two other candidates.

A mail piece arrived at voters’ homes last week from CAP – the Conservatives Alliance of Pennsylvania. The group is new – it registered on April 19 – and this appears to be its first action during the 2012 cycle.

The piece, above, accuses candidate Mike Regan, a former U.S. Marshall who took over as Deputy Pa. Inspector General in 2011, of working for President Obama, contributing to Arlen Specter after his party switch, and not being a lifelong Republican.

Regan did work for Obama, as he did for Bush, Clinton, and Bush Sr., as a U.S. Marshall. His most recent contribution to Specter, $500 in February 2009, came two months before his party switch (but the week after Specter’s vote for the stimulus). He gave $750 during the 2004 cycle. He was registered as non-affiliated before switching to the GOP in 1997.

Regan blamed Rocco Pugliese for the mailer. Rocco’s son Anthony is also in the primary. He was a press flak in then-Attorney General Tom Corbett’s office, policy directory for Corbet’s 2010 campaign, and currently serves as Legislative Director of the Department of Community and Economic Development.

“If the Puglieses believed the falsehoods they put forth in this mailing were true, why not have the courage to follow the law and mail it out under the son’s campaign committee,” Regan said. “It can only be because the Pugliese family knows – as I do – that their charges are so blatantly false or distortions of the truth they did not want to be associated with them.”

As evidence of the connection, Regan cited the address on the mailer: P.O. Box 11608, Harrisburg, PA 17108. It’s also used by the Burgess McCormac Foundation, where Rocco has been a Director. Likewise it’s been listed as the address for RTK Committee, an organization that has also shared an address with a Pugliese business.

Regan’s initial press release include allegations of fraud, based on his mistaken impression that the group was not registered with the Pa. DOS.

Anthony Pugliese’s campaign said it had nothing to do with the mail piece.

“We had no involvement in the mailed,” said campaign manager Colleen Weldon. “We were just as surprised when one of our volunteers brought it in.”

Weldon added that her camp had investigated the charges and found each to be true.

PoliticsPA is seeking a response from Rocco Pugliese.

Regan isn’t the only one complaining about the mailer. The Citizens Alliance for Pennsylvania is a group that has been very active in GOP primaries recently and loves to target moderate Republicans and support conservative challengers. In HD-92 they have sent out positive mailers for Dan Johnson, the general manager of a hotel in York County.

CAfP is claiming that CAoP is deliberately misleading voters. Both abbreviate their group “CAP.”

“This is just pure dirty politics,” said CAfP spokesman Leo Knepper. “That someone would use the credibility that we have built for CAP in order to lend credibility to these spurious claims is beyond the pale. We are consulting with legal counsel and will pursue legal action if viable. Furthermore, we will work to determine who is behind this sham organization and expose them as the frauds they are.”

The chairman of the Conservatives Alliance of Pennsylvania, according to the organizations filings with the Pa. Department of State, is Harry Triolo of Plymouth Meeting. Its treasurer is Alexander Jablokov of Skippack.

Triolo refused to comment for the story; PoliticsPA was unable to reach Jablokov.

Two Republicans are running in addition to Johnson, Pugliese and Regan:

Scott Derr is a financial investment advisor with Comprehensive Financial Associates and is the owner of Blowfish Fertilizer, a locally based natural and organic lawn care company.

William Sieg served as a special assistant to the Secretary of Transportation in the Corbett administration. He is the nephew of Pa. Sen. Jake Corman (R-Centre) and was endorsed by Rick Santorum.

Charles Comrey, a firefighter, is the long Democrat running in the safely Republican district.