Smith Brings to “War on Coal” to TV (Watch Video) 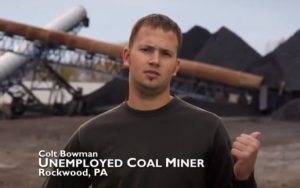 Smith, a former coal miner and coal company owner, has hammered Casey for months on his votes for greater regulation of the industry.

“That’s why I’m supporting Tom Smith for Senate. He’ll fight for us because he’s one of us,” Bowman says.

The ad is airing in central and western Pa.

“Tom Smith made a fortune as a coal company owner and he has already dropped $17 million of that fortune into running attack ads like this one,” he said.

“Bob Casey has taken a commonsense approach that protects public health from dangers like mercury pollution while promoting Pennsylvania jobs.  Bob Casey has been a supporter of clean coal and of measures to speed the development of carbon capture and storage.”

“Republicans claim that Sen. Casey has conducted a war on coal, which is insulting to miners. Smith doesn’t explain that last year employment in the coal mining industry reached a 15-year high,” he said.

Smith was formerly a member of the United Mine Workers before he started his company. His coal operation was mining more than a million tons of coal a year and employed over one-hundred people at the time he sold them.

And in general the “war on coal” theme may be off base. There’s significant evidence that the real reason coal is losing ground is Marcellus shale as much or more than the President.