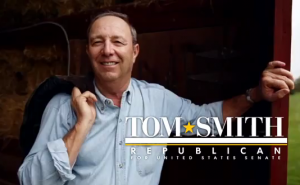 Smith’s campaign officials say the latest announcement indicates he isn’t going away despite being relatively unknown among Pennsylvania voters.

“We will continue to contrast the records of Senator Casey, an ineffective career politician who has done nothing to create jobs; and Tom Smith, a businessperson and proven job creator who will reduce the debt, lower taxes on small business and get our economy moving.

Larry Smar, Casey’s spokesperson, dismissed the substance of the new ad buy as well as the procedure by which it was announced.

“I don’t think I’ve ever seen a campaign put out a release about a buy like this before. I guess anything is better than Tom Smith explaining the Tea Party group he founded or his support for policies that will send jobs overseas,” Smar said in an email.

It isn’t clear if an ad released yesterday by Smith’s campaign is a part of the Philadelphia ad buy. Smith’s Communications Director Megan Piwowar said details of the media blitz won’t be disclosed.

In Quinnipiac University’s latest poll, Casey held a commanding 55 percent to 37 percent lead over Smith, with the two-term Senator enjoying a polling boost due to name recognition and background.

Smith is a southwest PA native and a strong supporter of the coal industry. His first campaign ad has been airing in the Pittsburgh market for weeks, but it is unclear how long that ad will run.

But Piwowar said in an email that Casey’s record already damages his credibility in the southwest corner of the state.

“Senator Casey has clearly demonstrated he is no friend to domestic energy jobs including Pennsylvania coal, Piwowar said. “His vote of confidence for the President’s activist EPA and support for the ‘Frac Act’ have placed thousands of jobs at risk.”