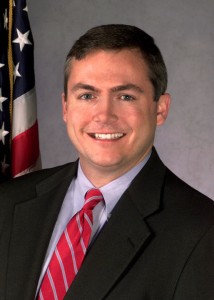 After weeks and even months of rumors, State Rep. Matt Smith (D-Allegheny) has thrown his hat in the ring for the race to replace recently retired Sen. John Pippy.

“Over the last several days, I have been approached by friends and supporters; Republicans, Democrats, and Independents; and voters from across the 37th Senate District to run for the State Senate,” Smith said in a press release. “After discussing the opportunity with my family, I have decided to seek the nomination to become the Democratic Candidate for Pennsylvania’s 37th Senatorial District.”

His opponent will be Raja, a businessman and 2011 Allegheny County Executive candidate. On Tuesday, Lieutenant Governor Jim Cawley announced that there would not be a special election for the seat; it will occur in November.

“I also want to thank Greg Parks for his commitment to public service and his willingness to initially put his name forward as a write-in candidate in the April Primary,” he added.

Democratic insiders told PoliticsPA that no top tier candidate was willing to run at the beginning of the year because none wanted to face State Rep. Mark Mustio, an Allegheny County Republican with strong relationships with organized labor.

But Dems organized a write-in effort for local activist Greg Parks in the event that Mustio lost the primary, which ultimately he did to Raja. At that point, Smith and a few other more conventional candidates expressed a willingness to get in the race.

It was a crafty maneuver by the Senate Democratic Campaign Committee and its Chairman, Sen. Daylin Leach (D-Montco).

The 37th district is one of four primary Senate targets for Democrats; they’re also looking at open seats in Erie and Harrisburg, plus potentially vulnerable incumbent Sen. Elder Vogel (R-Beaver). This one may be their steepest uphill battle, at least financially. Raja is independently wealthy, and sources close to him are eager to note that he’s willing to spend whatever it takes to win.

That said, Raja lost the 37th during his Exec run in 2011* and his business, which assists companies with outsourcing and itself has branches overseas, has provided opponents ample grounds for criticism.

*The portion of the 37th in Allegheny County; voter registration in the Washington County portion is 57.5 percent GOP, 32.8 percent Dem. Overall, the district is 47.9 percent Dem to 41.3 GOP.

Raja’s camp criticized Smith over the process by which he came to be the favorite candidate.

“The voters will have a clear choice between a liberal Harrisburg politician who was handpicked by party bosses and an independent leader and job creator who will get our economy moving agin,” Raja Campaign Manager Jennifer Haas. “Despite Matt Smith’s rhetoric his record of voting for higher taxes, more spending, and job killing policies are out of step with the 37th District. We look forward to a vigorous debate on those issues in the month’s to come.”

PoliticsPA is seeking confirmation that Smith is planning to seek re-election simultaneously to his House seat.