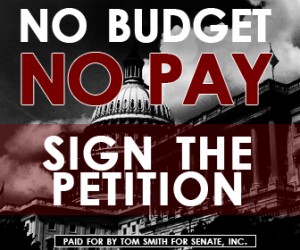 The U.S. Senate hasn’t passed a budget in over 3 years, and Tom Smith today laid the blame on Senate Democrats, including his opponent Bob Casey. In an online petition, the Republican hopeful backed a No Budget, No Pay measure – but stopped short of endorsing any specific spending proposal.

“Senator Casey and the career politicians are failing to do their job,” insisted Smith, pointing to Casey as an example of Senatorial ineffectiveness,  “. . .when you don’t do your job, you don’t get paid – Senator Casey should expect no different.”

The petition is here.

It’s a common refrain for elected officials and candidates. Indeed, the language is similar to that of a letter to Treasury Secretary Timothy F. Geithner that Casey co-authored in 2011 during the debt ceiling debate. It, too, argued that Congress members should not get paid if their failure to raise the debt ceiling results in U.S. government default or shutdown.

“If we cannot do our jobs and protect the full faith and credit of the United States, we should not get paid,” Casey and Senator Barbara Boxer wrote at the time.

There is currently a No Budget, No Pay bill, S.1981, introduced by Sen. Dean Heller (R-NV), with 10 cosponsors (9 Republicans, Democrat Joe Manchin, and no Casey).

Democratic leadership in the Senate has avoided proposing or passing a budget plan, likely to avoid public intra-party conflict and potential general election liabilities – not to mention the unlikelihood of striking a compromise with the House GOP. Rather, they’ve been authorizing individual elements of the government piecemeal.

It precipitated a showdown with House Republicans, eventually culminating in the Budget Control Act, which raised the debt ceiling, outlined failsafe spending cuts, and established the bipartisan super committee which tried and failed to find a budget agreement.

A spokesman for Casey, who supported the compromise, pointed out that it, “outlined funding levels and cut spending.”

Smith has said in the past that he would have supported the Ryan budget, and his campaign offered kind words about all three men Monday.

“Tom would work tirelessly to ensure Congress fulfills its obligation to pass a budget,” said Smith Campaign Manager Jim Conroy. “Tom commends Senators Toomey, Paul, and Rep. Ryan for continuing to work towards a solution – while Senator Casey and the Senate majority have walked off the field. That’s why Tom believes congressional pay should be suspended until a budget is passed.”

Casey keeps his party’s position on the GOP budget. “Senator Casey has voted against Republican proposals that would turn Medicare over to the insurance industry and increase costs for older Pennsylvanians in order to provide tax cuts for the wealthiest Americans,” said Smar.

But he also points to his willingness to reach across the aisle as proof that he’s better suited to the job than his rival Smith, who boasted in a primary campaign commercial that he would never vote to raise the debt ceiling, as the Budget Control Act compromise did. The failure to pass that bill would have resulted in a government shutdown and sent shockwaves through international stock markets.

“Senator Casey is more interested in coming together to solving the problems facing Pennsylvania families than in playing politics,” said Smar. “Unfortunately, the dangerous brinksmanship pushed by the Tea Party and the House GOP is too common in Washington.”