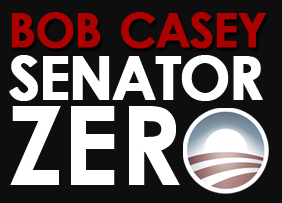 In meetings, town halls and interviews, Bob Casey is nearly impossible to stump. On practically any issue from milk prices in Pennsylvania to IEDs in Pakistan, the freshman Senator can point to a bill he’s introduced or a letter he’s written to address the problem.

Today, his opponent is demanding results.

Tom Smith, a former mining company owner and Tea Party leader, launched the website SenatorZero.com. He charges that Casey has sponsored 324 bills since April 2007, but not one has become law.

It’s a one-page microsite that includes a web video (above), rolled out in a big push by the Smith team and the PA Republican Party.

“For more than five and half years, Bob Casey has done nothing to address a dismal economy and stagnant unemployment,” said Smith. “While Pennsylvanians have suffered, Senator Casey has failed to offer a single solution, and failed to pass a single piece of legislation into law.”

The tactic is common for incumbents, as is the line of attack for candidates. Indeed, Smith made a similar charge against former state Rep. Sam Rohrer during the GOP primary.

Smith also criticized Casey for voting 95 percent of the time with President Obama, as well as accepting over $1.3 million in campaign contributions from lobbyists and attorneys. And Smith also implies that the Senator is introducing bills for political purposes (like this one, perhaps). He’s sponsored 199 bills so far this election cycle, compared to 125 in his first 4 years.

Casey spokesman Larry Smar said the attack shows that Smith doesn’t get how the Senate works.

“Due to compromise and negotiation, bills and amendments are added to other bills or a different version of the bill is the one that is signed into law,” Smar said. “Bob Casey has a record of working with Republicans and Democrats to find commonsense solutions to problems.”

He pointed to a number of the Senator’s legislative accomplishments that don’t fit in the introduced-then-passed paradigm of Congress, including: extending the payroll tax cut, new ethics rules, add-ons for PA in the Farm Bill, and new rules that help reduce abortions by providing government assistance to pregnant women.

Smar pointed at the GOP-controlled House, where a number of Senate-passed bills have withered.

“Tom Smith wants to go to Washington to push a rigid Tea Party agenda.  His Tea Party allies in the House have blocked a number of issues important to Pennsylvania jobs,” he said.

On the heels of Smith’s latest attack comes new legislation from Casey.

In a press release from Casey’s office, the Senator said his legislation benefits working Pennsylvanians.

“Companies that outsource their call centers overseas shouldn’t see the benefits of government grants and loans,” Casey said. “Keeping call center jobs in Pennsylvania is good for our workers and our economy, and my bill will send a clear signal that outsourcing jobs will not be rewarded.”