PoliticsPA scores PA-Gov candidates on their website and social media presence. Grades are subjective represent a combination of quality and quantity measurements. 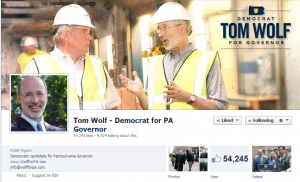 Wolf has an active Twitter and Facebook page, and his website is top notch. His Twitter was boosted from the amount of retweets he garnered from his Western Pa. endorsement event. His photos are clean and sleek, and he has more Facebook fans than any other competitor in the field. 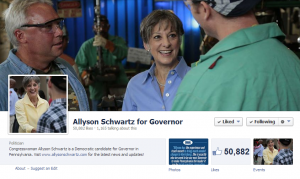 Schwartz has solid social media all the way around, clear information and regular updates although there is little personal influence felt. She does regularly post cool quote photos from the campaign trail that are well-shared on Twitter. We also award her “Best Candid Facebook Profile Picture.” 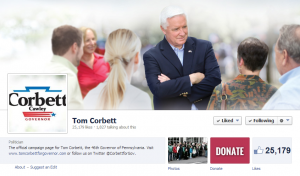 Corbett is superbly active on Twitter and garners plenty of retweets from his broad fan base. The well-funded incumbent has pages that are professional and aesthetically appealing. His accounts are used for the coordinated campaign, as Lt. Gov. Cawley does not have any of his own independent campaign pages. 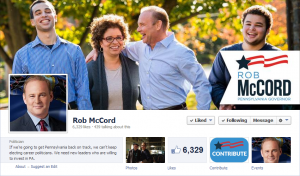 McCord Clearly uses social media a great deal, his website also has social media updates, so he does rely on it to a good extent. What he lacks in quantity of followers, he makes up for in fantastic family photos. In the event that he decides to leave the political realm, the McCord family may have a future in boilerplate photos that are sold in picture frames. 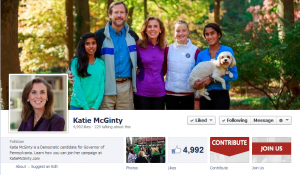 McGinty is a pretty active participant in social media, despite her smaller following. She posts high retweet numbers because of extensive live tweeting from labor events. She’s got one of the most vibrant Facebook pages and, like the McCords, has a photogenic family featured prominently. 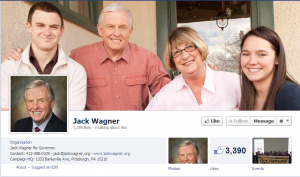 Wagner has a fairly large Facebook fanbase, considering that he hasn’t posted a status since he lost the primary for Pittsburgh mayor. He’s got nice pictures, and posted actively during the mayoral race but it’s gone quiet and he has no Twitter presence.