Editor’s note: This is the first installment in a new PoliticsPA feature called Staff Spotlight, which puts the focus on the people working behind the scenes in politics — the ones who keep the campaigns afloat and the offices operational. Throughout the course of this year, we’ll introduce you to staffers from across the Commonwealth: Democrats, Republicans, and Independents. Our goal: that these profile pieces will give you a glimpse into who these staffers are, why they got into public service, and what keeps them motivated.

When television host, cardiothoracic surgeon, and author Mehmet Oz announced his candidacy for Senate last November, many politicos from both sides of the political spectrum were surprised. 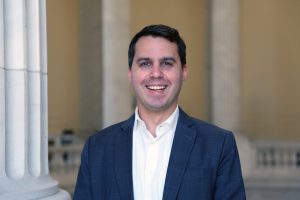 Prior to Oz running for office, Contres heard through mutual contacts that he would be announcing soon. These contacts encouraged him to consider becoming Oz’s campaign manager and set up a meeting between the two of them. While Oz’s celebrity status garnered a lot of attention, Contres ultimately saw a candidate he was convinced wanted to serve the people of Pennsylvania.

“He is one of the hardest-working individuals I have ever met,” Contres says, “and he wants to hear from people.” Contres signed on to run the campaign.

Contres grew up with modest means in Northern Cambria borough — a small town of about 3,800 residents near Johnstown. His parents worked hard to make ends meet, and they still live there.

Towards the end of high school, Contres managed a documentary project about Vietnam veterans for his history class. The film was called “We Never Got the Welcome Home: Vietnam Veterans Remember Vietnam” and was funded by a History Channel initiative that encouraged high school students to become filmmakers.

Contres’ teacher, Ron Nocco, knew former Congressman Bill Shuster’s district director, Jim Frank, and told him about the project. Frank ended up showing the documentary to Shuster and arranged a meeting between the two. That documentary project and meeting changed the trajectory of Contres’ life. He kept in touch with Frank and Shuster, and while Contres was attending Indiana University of Pennsylvania (IUP), the Congressman offered him an internship in the district office, which he immediately took.

After graduating from IUP in 2011 with a bachelor’s degree in political science and journalism, Contres moved to D.C. to become an intern for Shuster for a few months on the Hill. These experiences served as the catalyst for Contres’ political career.

He went on to work as a press assistant for former Congressman Tim Murphy and campaign manager for former state senator candidate Janet Anderson before going back to work as a long-time staffer for Shuster — both on the campaign and official side.

He served as a field director, political director, campaign manager, and communications director for Shuster. When asked what it was like to work for Shuster, Contres says, “Bill is like family to me. We are very close, and he has always been such a great mentor.”

He was connected to Congressman Tony Gonzales (TX-23) who asked him to become his chief of staff. Contres served in that role for a little over a year before taking the job with Oz. “The best part about being the chief was building a team from the ground up,” Contres says.

As the chief, he was responsible for everything that took place in the office. From scheduling to meetings to votes, Contres was involved in it all. “It is so important to treat every single person on your team with respect — that is one of my personal values. When you are leading a team, they should always feel comfortable coming to you with questions, concerns, or issues.”

For many staffers, becoming a chief of staff on Capitol Hill is the ultimate goal. But not for Contres.

“Congressman Gonzales was terrific, but when I had the opportunity to meet Dr. Oz and was offered the position, I could not pass it up,” he says. “To support an individual like Dr. Oz and work to get him elected, so we can help Pennsylvanians, what is better than that? My philosophy is that you just don’t say no to opportunities when they arise.”

Serving as Oz’s campaign manager does not permit much free time. Campaign schedules are grueling — especially this one where Senate candidates are crisscrossing the Commonwealth. However, when Contres does have time, he is an avid Pittsburgh sports fan — watching games or reading recaps of them. He follows The Athletic, DK Pittsburgh Sports, likes to stay updated on local news from his hometown, and gives a shout-out to the Tribune-Democrat’s Dave Sutor.