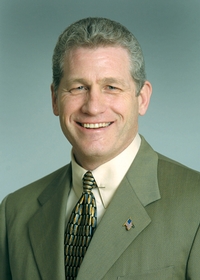 State Rep. Bernie O’Neill (R-Bucks) will not run for reelection for the race in Pennsylvania’s 29th Legislative District.

The eight term GOP incumbent officially withdrew on Monday, on the state’s last day to drop out for the November ballot, citing the need to focus on caring for his older sister.

“Most people are not aware, but I am the guardian and caregiver for my older sister, who is intellectually disabled and lives with my wife, Linda, and me,” O’Neill said. “My sister has had some serious health issues over the past year, and over the summer, it has become increasingly clear that her needs require more and more of my personal attention, care and support.”

Democratic candidate for the 29th District, Andrew Dixon, works as an Organizer with the American Federation of Teachers in New Jersey and is an adjunct professor at Rowan University.

He issued a statement via Twitter three hours ago thanking O’Neill for his service for the district.

Thank you to Bernie O’Neill for his many years of service to our district, and all the best to him going forward. Now more than ever, our district needs a strong advocate for the protection of our environment and for proper state funding for our schools, and I will be that voice.

O’Neill thanked his constituents for giving him the chance to represent the district.

“It has been a true honor and privilege to serve as the State Representative for the 29th District here in Bucks County,” said O’Neill. “As I serve out the remainder of my term, I hope to have the opportunity to personally thank my constituents and friends for entrusting me with the great responsibility of representing all of you in the Pennsylvania General Assembly. Again, it truly has been an honor and privilege.”