Bob Robbins (R-Mercer) announced Monday that he will not seek a 7th term in the state Senate.

“It has truly been an honor and pleasure to represent the great people of our area as a member of the House and Senate,” said Robbins, 69. “While the decision to retire has been a difficult one, I now look forward to spending more time with my family and friends as I move into the next phase of my life.”

He is the fourth Republican state Senator to decide not to seek re-election in 2014, following Sens. Mike Brubaker (R-Lancaster), Ted Erickson (R-Delaware) and Mike Waugh (R-York). Democratic Sen. Jim Ferlo (D-Allegheny), whose district was moved across the state during redistricting, also will take a pass.

“But most importantly, I have been blessed to have the unwavering support of my wife, Cindy,” Robbins concluded. “I’m forever grateful for the many friends I have made and for the opportunities I’ve been given to serve.”

The Senator was Majority Policy Chairman from 1997 to 2000 and has been the Majority Caucus Secretary since 2001. Prior to the Senate, he served 8 years as in the state House.

Numerous Republican sources named state Rep. Michele Brooks (R-Mercer) as the favorite to be the GOP’s nominee, with an announcement planned for Thursday. Brooks, 49, also served as Mercer County Commissioner.

Meanwhile Michael Muha, a lawyer from Hermitage, has already announced his intention to run as a Democrat.

“I would like to thank Senator Robbins for his commitment to public service. Senator Robbins, a proud son of Greenville, is an American hero, who bravely served our country in the Vietnam War,” Muha said in a statement.

“As your next State Senator I will fight to create an environment for family-sustaining jobs, for quality public education in Pennsylvania, and to promote innovative solutions to repair the economic and communal stagnation that affects many communities from Sharon and Meadville to Titusville and Grove City.” 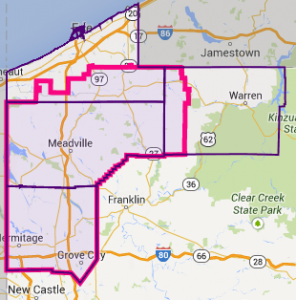 The 50th district comprises all of Crawford and Mercer counties as well as southern Erie and western Warren counties. The GOP holds a slim edge in voter registration, 45% to 44%. But the district typically votes Republican; for instance 2012 Attorney General hopeful Dave Freed beat Kathleen Kane there. SD-50 voters have not elected a Democratic Senator since the district was created in 1947.