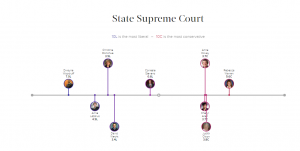 The new website Crowdpac is scoring seven of the commonwealth’s State Supreme Court candidates by ideology.

Yesterday, we described the scores of the Philly Mayoral candidates. As a reminder, each person is graded on a scale from 10L (most liberal) to 10C (most conservative).

One important caveat: Three people that will be appearing on next Tuesday’s ballot (Kevin Dougherty, John Foradora, Michael George) are not included because Crowdpac didn’t have enough data on their donations to calculate a score.

The most intriguing finding concerning the GOP candidates is that one of them, specifically incumbent Supreme Court Justice Correale Stevens, lands (just barely) on the liberal side of the spectrum. Stevens receives a score of 0.6L.

In theory, this could help Justice Stevens in a general election. After all, most voters would probably want a sitting Justice to be as close to the ideological center as possible. Unfortunately for him, though, Republican voters are likely to want a conservative as their party’s nominee.

The PA GOP formally endorsed George, Olson and Covey back in January.

Finally, Common Court Pleas Judge (and ex-Pittsburgh Steeler) received a 7.0L and wins the title of most liberal candidate in the field.