Statewide Candidates Get on the Ballot 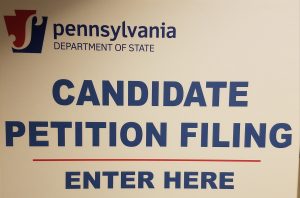 The 5 pm deadline passed on Tuesday, and now we know who has officially filed to be on the statewide ballot in the May primary.

To get onto the ballot statewide, each candidate had to file 1,000 valid signatures, including at least 100 from five counties. PoliticsPA asked each candidate to estimate their number of signatures.

There is no competition in the GOP primary for Supreme and Commonwealth Court races.

Party-endorsed Supreme Court candidate Justice Sallie Mundy is the only name on the ballot.  For Commonwealth Court, it will be Judge Christine Fizzano Cannon and Paul Lalley.

“The PA GOP is energized to support our qualified candidates by building the grassroots and financial infrastructure needed for a seven-for-seven sweep this fall,” PA GOP Chairman Val DiGiorgio said.

The Supreme Court is the only uncontested Democratic primary race. Judge Dwayne Woodruff’s name will be the only one on the ballot.

Update: Woodruff filed 11,000 signatures, according to his campaign.

In the Superior Court race, the party-endorsed candidates are Judge Carolyn Nichols, Judge Deborah A. Kunselman, Judge Maria McLaughlin and Judge H. Geoffrey Moulton Jr. They will be joined on the ballot by William Caye of Allegheny County.

Update: According to her campaign McLaughlin filed 13,187 signatures, the most of any candidate.

Update: According to her campaign, Nichols submitted 6,900 signatures.

“I am humbled and honored by the tremendous support we received. What we accomplished with a purely volunteer support base was truly incredible,” Kunselman said.

“Thanks to PA State Democratic Committee members, county and municipal committees, and countless volunteers who helped make sure there would be no doubt that we would be on the ballot,” Moulton said.

“It is awe inspiring to see such a groundswell of support from so many people across Pennsylvania,” Eagen said.

Update: According to his campaign, Cosgrove submitted 5,635 signatures.

“It’s humbling to have that kind of support throughout the Commonwealth, and I am looking forward to continuing to work hard to earn it every day,” Ceisler said.

“I am looking forward to the primary election,” Barbin said.

James Crumlish, who sought the endorsement of the Pa. Dems did not file with the Department of State.

Albert J. Flora Jr., and Judge Lillian Harris Ransom sought the Pa. Bar’s recommendation, but did not seek the endorsement of the party, or file petitions with the Department of State.

The campaigns will now turn their focus towards the other candidates’ petitions, March 14th is the last day to file objections to petition signatures.