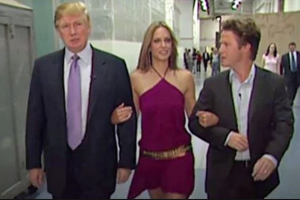 We’ve collected the reactions of various candidates and officials to Donald Trump’s comments on women:

“Today people are making a big deal about things that Donald Trump said 11 years ago, and maybe they should. But as we’re talking about this, women and children are being killed in Aleppo and there are many life-and-death issues that we have to deal with. Donald Trump has a plan for dealing with them. I’m very comfortable moving forward with him.”

“As the mother of three teenage girls, the comments Donald Trump made in this latest recording are some of the most appalling and despicable I’ve ever heard, but unfortunately, I can’t say I’m surprised to hear them,” said Katie McGinty. “Donald Trump has spent his entire career demeaning and degrading women. Young girls and women across this nation deserve better. What further evidence do we need that Donald Trump is completely unfit to be president of the United States?”

“Let me be clear: Donald Trump’s comments 10 years ago were reprehensible and indefensible—period. My support’s based solely on which candidate can best revive our economy and make our Nation stronger and safer. That candidate is not Hillary Clinton.”

“Donald Trump’s comments in the recently released video are atrocious, disrespectful towards women, and are incredibly inappropriate for someone who wants to lead our country.”

“For the good of the country, the Republican Party, and his family, I hope he’ll step aside and end his candidacy for President so that we can come together as a party and defeat Hillary Clinton.”

“This sort of vile talk is appalling, it’s offensive, and there’s no place in public or private for it. It’s simply wrong.”

“Donald Trump’s vulgar remarks about women are disgusting, and there is no excuse for this type of language. Women have been a valuable and integral part of my management teams throughout my professional career. I could not look into the eyes of my mother, my wife, my daughter or my colleagues in Congress without condemning such inappropriate comments. Women are to be respected and treated as equals — always. Donald Trump owes his supporters and all Americans an apology without mitigation. Many have asked if I will continue to work to support Mr. Trump’s candidacy. All I can say is that I will be watching in the coming days and I am hopeful he can make amends.”

“Donald Trump’s comments were indefensible, demeaning, and totally inappropriate. He needed to apologize and take responsibility for his actions, and I am glad he took that important step,” Barletta said. “This election is about the future direction of our country, and we should not hand the keys over to Hillary Clinton.”

“I am sickened by Mr. Trump’s offensive comments. They are vile and wholly unacceptable and I strongly condemn them.”

“They are indefensible and disturbing coming from an individual seeking the nation’s highest office,” Dent said in a statement. “Given his past erratic behavior and incendiary comments, the latest revelations regarding Donald Trump do not come as a surprise.”

“He said he was wrong, and I agree. The comments were thoughtless and ugly and stand in sharp contrast to the values of Southwestern Pennsylvania, the Republican Party, and our nation. I will hold him to his pledge to be better than those comments.”

“As a husband and a father of two daughters, I find Donald Trump’s comments about women to be lewd, inappropriate and appalling. I strongly denounce these offensive comments”

“Our campaign has repeatedly called for Lloyd Smucker to repudiate his standard-bearer’s troubling and disgusting words. Tonight is no different. Donald Trump denigrates women, yet he’s earned Lloyd Smucker’s support. Lloyd Smucker must be held accountable and at Monday’s debate he will finally have to explain to the people of this district why he has endorsed a man who makes casual and lewd remarks about sexual assault.”

“”Donald Trump’s comments and actions are offensive and disgusting and they cannot be rationalized or ignored, regardless of context.  Like the vast majority of residents in this district, I have been frustrated by this presidential campaign because neither candidate shares our values. This is why, as a former FBI Supervisory Special Agent and Federal Prosecutor, I have refused to endorse either candidate, and reached the point that I cannot vote for either candidate.

While Steve Santarsiero has steadfastly refused to show any difference between himself and his party’s nominee – the voters of this district can count on me to demonstrate independence always, regardless of the consequences.”

“Like his entry into this race after moving here from California just 9 months ago, Brian Fitzpatrick’s belated attempt to distance himself from Donald Trump is blatant political opportunism. Where was Brian while Donald Trump demeaned women, attacked minorities, mocked the disabled and a decorated war hero, belittled a Gold Star family and praised Vladimir Putin? Despite all of that, Brian was still on board the Trump train. Now, with the election just weeks away and Trump’s campaign in free fall, Brian is scrambling to save his own political skin. It is hardly a profile in courage moment, and it is certainly not an act of independence no matter how hard he tries to spin it that way; it is an act of political self-preservation. I am confident that the voters of the 8th District will see through it. After all, Brian still supports Trump’s agenda of defunding Planned Parenthood, slashing Medicare and Social Security and giving tax cuts to the wealthy at the expense of working families.”

Donald Trump’s comments, caught on tape, and released to the media on Friday are disgusting and deeply disturbing, not to mention totally disqualifying. That so many Republican elected officials, including Ryan Costello, continue to stand behind him serves as an embarrassing and constant reminder of my opponent’s failed leadership.

Beyond the entirely immoral and lewd nature of the comments made by the Republican Nominee, the acts Trump describes and brags about in the video are by any definition, including the one used by the Department of Justice, sexual assault and harassment. I have already seen defenders of Trump dismiss his language as ‘crude locker room chatter’. I served in the Army for 30 years and I have never heard something as totally appalling in any locker room or mess hall.

As the father of two daughters, the son of a wonderful mother, and frankly, as a human being, I am ashamed that Donald Trump is a credible nominee for President. The truth is that Trump’s ascent was made possible by the cowardice of career politicians, like Mr. Costello. Their continued complicity has only emboldened a dangerous man who does not demonstrate the judgment, temperament or character to lead our nation.

At this point, even if my opponent were to finally denounce Mr. Trump, and support the values of our community, it would be obvious lip service and disingenuous political opportunism.  Mr. Costello’s ongoing support for Donald Trump has shown us who he really is.

Trump’s comments are not surprising.   Donald Trump’s misogyny, ignorance, total lack of judgment, temperament and lack of  moral character have been on display throughout the long election cycle.  During the Primary, many prominent Republicans were quick to point to these very characteristics as evidence of his lack of fitness for office. Since his nomination, we have learned a lot more about both Donald Trump and the moral courage of his supporters in the Republican Party. Ryan Costello, Paul Ryan, and Mitch McConnell have turned a blind eye to their nominee’s obvious and offensive moral failings, once again putting their party over country, their own naked ambition and desire for victory in front of the needs of our nation, and in doing so have failed our communities and country.